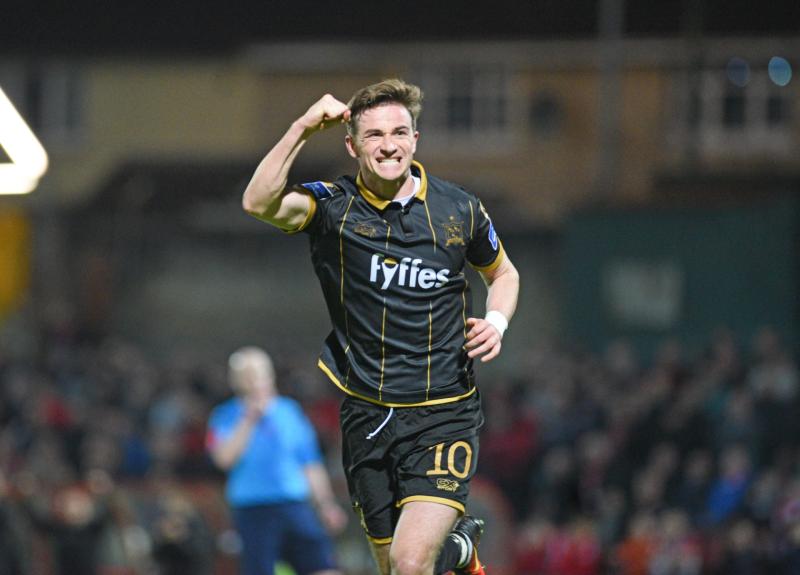 Match winner Ronan Finn is looking forward to another memorable day at the Aviva Stadium following the 2-1 victory at The Brandywell on Tuesday night.

The midfielder booked Dundalk’s place in the showpiece against Cork City on November 6 with a terrific 67th-minute header. It was his first goal since June and, speaking afterwards, he was quick to praise the contribution of Darren Meenan, who provided the assist with a fine cross.

“I knew Darren would put the ball into a good area and I just gambled that it would come over the defender’s head,” said Finn.

“All you can do in that situation is make a good connection and luckily it went in off the post.

“We’re delighted to get the cup final again,” he continued. “Last year was my first one and we were striving to get there again.

“It’s such a good day out and it’s more than just a game of football,” he added.

“There is a lot that goes with it, for your family and things like that, and Stephen reminded us again how important it was to be there.”

Kenny admitted that the performance was far from Dundalk’s best of the season. Finn agreed, but he felt that the champions showed another side to their game.

“There are different ways to win a match and I thought we dug in well and nicked our goals.

“We made a bit of a slow start. Derry showed that they are a good side and went a goal up but I always felt that with them scoring so early we always had time to get back into the game.

“We got our game going and got the ball moving. The first goal was a well-worked move and Ciaran took his penalty really well.

“The second half was nip and tuck and we had to be patient but we got the goal and soaked up the pressure. There was nothing that really troubled us after that and I think we really frustrated them.”

The cup final will take place just three days after Dundalk play Zenit St Petersburg in a Europa League clash in Russia. Finn, however, is looking forward to what should be an unforgettable week.

“You wouldn’t have it any other way,” he said. “If we were in Russia and knew there was no cup final at the end of it, it wouldn’t be a nice flight home.

“We can go to Russia now and know that we have that to come back to. That’s motivation in itself. You won’t need anybody to get up for the cup final game, it’ll look after itself.”

If Dundalk needed motivation at The Brandywell, they got it when they read the reaction from the Derry camp following the 2-2 draw at Oriel Park.

Candystripes captain, Ryan McBride, claimed that Derry were the fitter side while boss, Kenny Shiels, made some head-scratching comments about the quality of the Dundalk starting XI on the day.

“They were saying a few things in the media, questioning us and things like that and I think we responded really well to that,” said Finn.

“Our club’s not built on that sort of ethic. We do our talking on the pitch and I think we went about our business quite well today.”