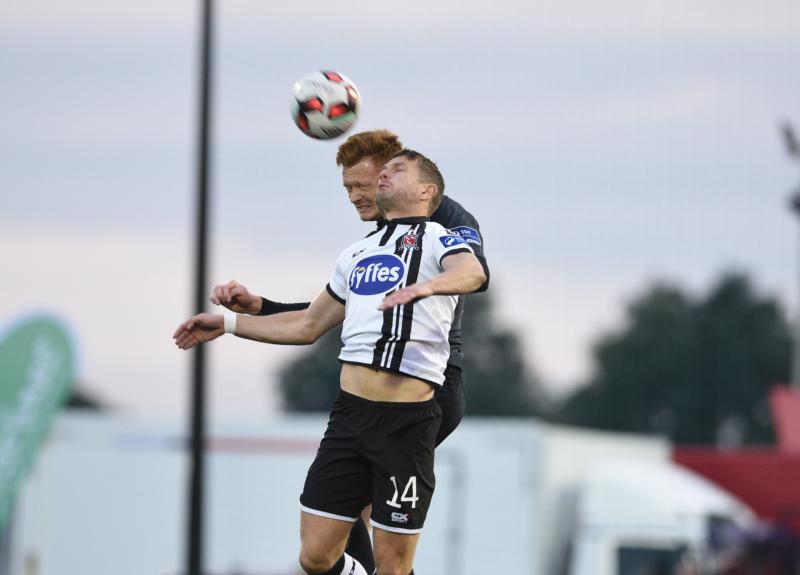 Brian Gartland’s fourth goal of the season rescued Dundalk a point against Shamrock Rovers at Oriel Park but the reigning champions will wonder how they failed to take all three after an absorbing game of football.

Rovers took the lead against the run of play in the 34th minute when Gary Rogers made a complete mess of dealing with Andy Boyle’s back pass, allowing Gary Shaw to roll home the opener.

Dundalk opened up after that and Gartland rose to guide a Patrick McEleney free-kick past Barry Murphy in the 59th minute.

The hosts felt they should have had a penalty when Dane Massey went down under pressure from Dave Webster with 10 minutes to play and Murphy made a superb stop to push Dean Shiels’ 98th minute header over the top.

The result extends Dundalk’s lead over Cork City at the top of the table to five points but Stephen Kenny’s team have now played a game more than The Leesiders.

Dundalk made one change from the side that picked up a point in their Europa League tie with AZ Alkmaar five nights earlier with Robbie Benson coming in to replace John Mountney.

Rovers, coming off the back of two successive defeats to Cork, introduced Gary McCabe, Gary Shaw and Sean Boyd to their line-up.

The first half proved to be one of the most entertaining of the season at Oriel Park. Dundalk, with Patrick McEleney at his bewitching best, started with intent and a nice body feint by the Derry native set up David McMillan for a pop at goal but the striker’s effort lacked conviction and Murphy gathered easily.

McEleney was involved again less than 60 seconds later, collecting a Daryl Horgan pass to exchange a one two with McMillan but, again, the shot proved to be easy for Murphy to deal with.

Dundalk continued to expose Rovers on the right and the Hoops were fortunate that Horgan didn’t connect fully with a fizzing cross from Sean Gannon that flew over the head of Rob Cornwall at the near post.

Things began to get feisty with Stephen O’Donnell having a nibble at the unhappy Gary McCabe with the Rovers player on the deck. Rovers striker Sean Boyd then found himself in Rogers’ notebook after scything Horgan down in the 19th minute. Television footage showed that he was a very lucky boy to remain on the pitch.

Horgan showed no ill effects of the tackle when he jinked his way across the Rovers back four to drive a right footed attempt at Murphy. Prior to that, Gannon fired wildly over the top after Horgan and Dane Massey had worked an opening on the left hand side.

Rovers eventually bedded into the game just before the half hour mark with Shaw bringing out a good save from Rogers after connecting with Shane Hanney’s well delivered cross from the right.

The Dundalk goalkeeper was left shaking his head three minutes later, however, after horribly mis controlling Andy Boyle’s difficult pass across his penalty area, allowing Shaw to tap home one of the easiest goals he will ever score.

The Meathman did much better four minutes later, palming Dave Webster's 20-yard drive away and Dundalk went up the other end and went within inches of equalising. Horgan and Massey again unlocked the Rovers defence but McMillan couldn’t squeeze the ball inside Murphy’s near post.

The champions pushed hard for a goal before the break and they almost got it in the 38th minute when McEleney cut back onto his left foot to make a yard of space on Sean Heaney only to see his curler kiss the upright.

Benson’s header was deflected wide by Cornwall with Finn heading the subsequent corner over the top as Rovers made it to the break with their lead intact.

Kenny introduced John Mountney in place of Benson at the break, no doubt in an effort to get McEleney more involved in a more central area. Rovers, though, kept their shape, if not their discipline, well in the opening minutes of the half with an overhit Massey free-kick the closest the hosts came to restoring parity.

That all changed just seconds short of the hour. Cornwall conceded another needless free on the left and Gartland managed to escape the attentions of Boyd in the middle to meet McEleney’s delivery and head home.

With the home support willing them on, Dundalk cranked up the tempo and Horgan managed to bundle himself through Cornwall’s tackle and locate Finn but the former Rovers man was denied by Murphy.

All eyes were on Rogers when Massey went down under contact from Webster after darting into the Rovers penalty area. The official blew, but to award a free out, adjudging the Dundalk full-back to have taken a dive. Again, replays showed that the Rovers player was fortunate to get the decision.

Horgan saw a placed effort tipped over the top by Murphy before Rovers caretaker manager Stephen Bradley was sent to the stands for kicking the ball away in a frantic end to the game.

Eight minutes of stoppage time followed and Dundalk almost won it right at the death when substitute Dean Shiels headed goalwards but Murphy made a fantastic stop to secure Rovers a share of the spoils and put a dent in Dundalk’s bid for three-in-a-row.