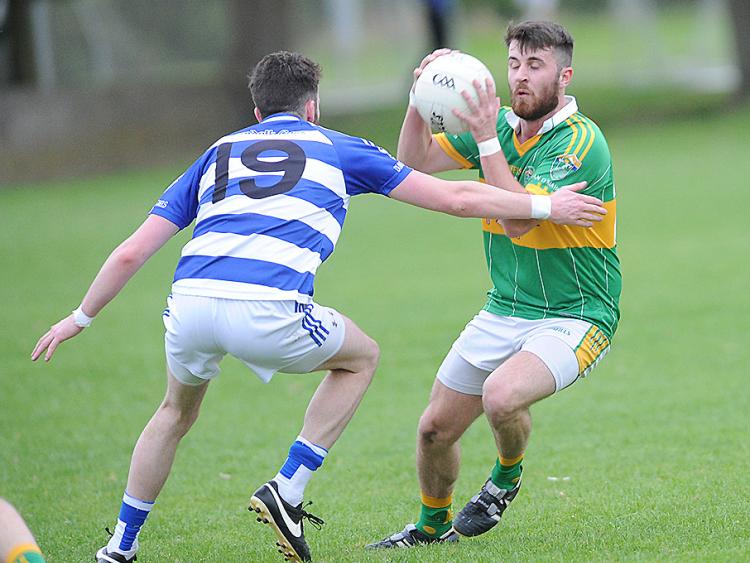 Sean O’Mahony’s advanced to this year’s Louth Senior Football Championship final at the expense of a plucky Dundalk Gaels side in the first part of the semi-final double header in Haggardstown on Saturday evening.

Having shipped three goals in their quarter-final outing against the Geraldines, the O’Mahony’s were determined not to concede any goals in this encounter.  As a result, they defended stoutly with players like John O’Brien, Liam Dullaghan and Conor Martin putting in excellent workman like shifts for the cause.

At the other end, Ben McLaughlin kicked five points over the hour and as well as the former Dundalk FC starlet, special mention should also go to Johnny Connolly who touched the ball 17 times and provided five assists on the night, playing a major part in the Point Road side’s three point win.

The O’Mahony’s forced the Gaels to shoot from difficult positions and this tactic worked a treat as Malachy O’Rourke’s side only kicked four points from their 12 attempts. The Gaels were also dealt a crucial blow in the 19th minute when county star James Stewart limped off injured.

Despite missing the suspended Keith McLaughlin, the men from the Quay were quicker out of the blocks than their opponents and were five points to two ahead after 24 minutes.

The early purple patch began when Ben McLaughlin put his side ahead following patient build up involving Stephen Fisher and Moments later Conor Finnegan converted a ’45.

McLaughlin pointed again after being set up by Conor Crawley, whose battle with Gaels full back Jamie Faulkner made for intriguing viewing for the large crowd in attendance. McLaughlin was on fire in that opening quarter, kicking scores from both feet and from all angles as he again pointed to put the O’Mahony’s four points clear.

It took the Gaels 16 minutes to register a score but when it arrived it was worth the wait. Following a turnover in their own half from Peter McGinnity, Shane Rice, who operated as a sweeper, played in Gerard McSorley and he kicked a splendid point from a tedious angle to get the Gaels off the mark.

Sean McCann got their second minutes later with an effort that was equally as spectacular but, following a foul on McLaughlin, Finnegan converted another free for the O’Mahony’s before Conor Crawley got his fist to a long ball from John O’Brien to register another point.

Jason Clarke and Finnegan traded frees before another Clarke dead ball shortly after meant that the Gaels were only three points in arrears at the interval.

The O’Mahony’s started the second half brightly and Ben McLaughlin put them four clear following more superb work by Connolly. It could, and probably should, have been more but they also kicked five wides in that period.

The Gaels managed to hang in there and Sean McCann scored his second point of the game before Connolly set up Stephen Kilcoyne for another O’Mahony’s point, 0-9 to 0-5. Eanna McArdle of the Gaels reduced it to a three point game approaching the final 10 minutes.

Stephen Fisher took a tumble in the Gaels rectangle but despite protests from players and supporters alike, referee Stephen Murphy waved away the O’Mahony’s appeals for a penalty.

Connolly again set up McLaughlin for another point as Alan Craven’s side edged towards the line but a Derek Crilly free and another point from McArdle meant that the game was very much in the balance approaching injury time.

However, with the winner’s enclosure in sight, the O’Mahony’s introduced the experienced David Dowling from the bench and they went up another gear to increase their lead to four points thanks to late scores from Finnegan and Fisher to see it out.

And, despite a late point from the Gaels’ Shane Rice, who had goal on his mind, the O’Mahony’s were not to be denied and they now advance to their second consecutive Joe Ward Cup final, looking to go one better than last year when they were losing finalists to St Patrick’s.