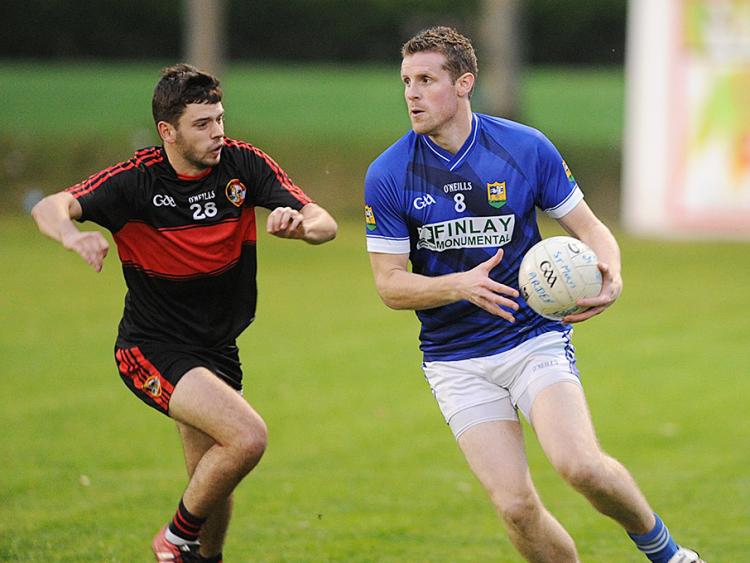 The sleeping giant of Louth football, Ardee St Mary’s, compounded more misery on the Dreadnots in the Senior Championship semi-final in Haggardstown on Saturday night.

Once again the Clogherhead side, like a noble sherpa, have served as a guide for yet another team to gain a place in the Joe Ward final.

The Mary’s will make their first appearance in the showpiece for 13 years and, in truth, they were full value for the win that ensured their place in it.

Nonetheless, it was the Dreadnots who got off to the perfect start, and, right from the throw in, Conor Campbell hit the back of the net after a fine run and finish inside Peter Duffy’s near post.

This was Ardee’s third game in as many weeks at the Haggardstown venue but they could not familiarise themselves with the posts as they missed numerous chances. Their wide tally was well into double figures in the first half.

Finally, Paudy Clarke got the Mary’s off the mark, with a strong solo run right down the middle after 13 minutes.

A clearly out of sorts Clogherhead side were overrun down the middle as the men in blue rattled off three more scores with Clarke, who was a thorn in the Dreadnots defence all evening, hitting two and Mark Fay the other.

Despite county midfielder James Califf making way - visibly struggling with a heavily bandaged left leg - a Brendan Matthews slip allowed Peter Kirwan to slip the ball under Duffy for another Dreadnots goal, 2-0 to 0-4.

Ardee then hit three in a row, two Darren Clarke frees before his namesake Paudy fired over for his fourth score of the first half. Chris Mulroy, however, earned the Dreadnots an undeserving stalemate with their first point on the stroke of half time.

The second half began with a John Bingham point, highlighting Ardee’s intent. Dreadnots wing forward Barry Faulkner then hand passed over the bar after a strong run by substitute Pat Lynch to level.

The Mary’s hit back and a sublime Daire McConnon goal, which saw him outpace his marker, Derek Shevlin, along the end line before firing a goal reflected the flow of the game on the scoreboard. 1-8 to 2-2 in the Ardee side’s favour.

Once again, Clogher seemed to play better when they were behind.

Along with a Pepe Smith free, Peter Kirwan sprang into action, hitting three points in this period.

One was a superb leveller wide on the left and Clogher’s fourth score in a row by collecting a ball off the post to make it 2-6 to 1-8. Their last from play with over a quarter of an hour to play was telling.

Ardee responded through Paudy Clarke again, linking up well with McConnon to level, before giving them the lead after swivelling to make space for himself.

Interceded by a confident McConnon point, Pepe Smith hit three frees to keep the Dreadnots right in it but the calming influence of veteran Darren Clarke saw him kick the final two scores of the game.

The former inter county star levelled the game for the sixth time in the second half with a free before curling the winner from play.

Darren O’Brien picked up two yellow cards to leave the Dreadnots with 14 men as the favourites tried in vain to find an equaliser.

The Mary’s, though, ran down the clock to reach the final and give themselves a chance to well and truly awaken their Joe Ward slumber for first time in 21 years.