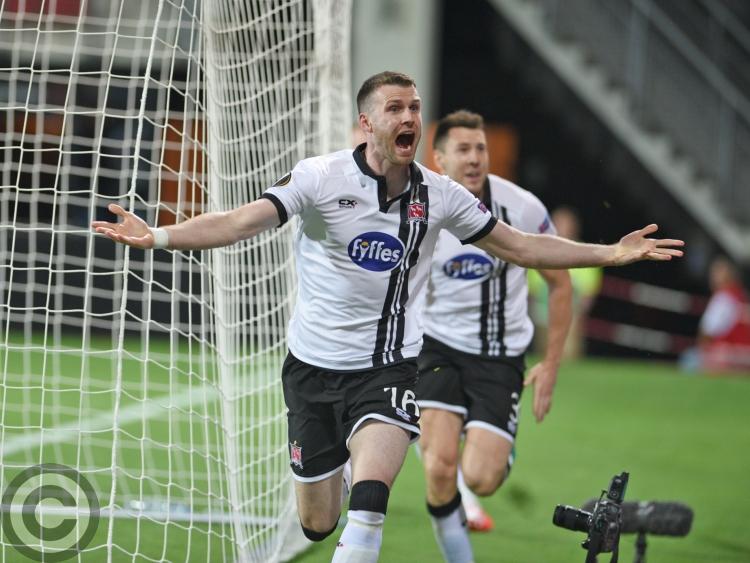 Ciaran Kilduff was Dundalk’s hero in Holland as the striker came off the bench to bag a late equaliser and secure the League of Ireland champions a point - and €120,000 - against AZ Alkmaar.

Trailing 1-0 to Stijn Wuytens’ goal on the hour mark, it looked like Dundalk’s Europa League campaign was going to get off to the worst possible start when captain Stephen O’Donnell was sent off with 19 minutes to play.

Kilduff, however, made his mark in the 89th minute, rising to glance a Daryl Horgan free-kick past Sergio Rochet to stun the hosts and write Dundalk’s name into the record books as the very first Irish side to pick up a point in the European group stages.

It put the cap on an entertaining game at the ASAF Stadion. Less than two minutes had elapsed when the hosts fired a warning shot. Iranian forward Alireza Jahanbakhsh cut in from the left to curl an effort at goal that beat Gary Rogers but not his far post.

Stephen Kenny’s side grew in stature as the minutes ticked by with Stephen O’Donnell and Daryl Horgan hugely influential.

Horgan carried the ball at pace effortlessly throughout and it was a penetrating run from the left saw him create Dundalk’s first opening, David McMillan firing the resulting pass over the top.

There were more encouraging signs five minutes later. Sean Gannon played a great ball down the right for McMillan to latch onto and Dundalk’s top scorer striker turned former Aston Villa defender, Ron Vlaar, inside out only to shoot weakly at Rochet.

Jahanbakhsh threatened again at the other end just past the 15 minute mark. Again he opted to cut inside from the left but Andy Boyle made a superb block to divert the shot away for a corner.

At the other end, Dundalk continued to look inventive with Dane Massey firing over the top and Horgan following suit two minutes later.

The Lilywhites’ best chance of the half arrived in the 34th minute. Picking up an O’Donnell pass, Horgan showed great tenacity to break through two tackles and burst into the AZ penalty area but just couldn’t lift the ball over the advancing Rochet.

Joris Van Overeem then glanced a Dabney Sousa cross over the bar before Dundalk were let off the hook right before the break.

Midfielder Derrick Luckassen’s shot cannoned off Andy Boyle and then Gannon, allowing Fred Friday to tuck the ball home. The assistant’s flag brought the celebrations to a premature ending but TV replays showed that Friday was onside when the shot was released.

The second half started at a ferocious pace with both sides on the offensive from the start.

Gannon did brilliantly to turn Fred Friday’s ball across goal to safety before a red shirt could tap home before play switched to the other end where Massey let fly with a drive that Rochet, again, didn’t deal with too convincingly.

Dundalk were undone in the 61st minute. Rens van Eijden’s searching pass from just inside his own half sought out the run of Stijn Wuytens and the midfielder managed to shake off Ronan Finn to meet the ball before Rogers and bravely head home.

Unfortunately, it proved to be Wuytens’ last action of the game, the subsequent collision with the Dundalk goalkeeper leaving him out cold on the pitch for five minutes before he was stretchered off. The harrowing reaction of his teammates, was an indication of just how serious the injury looked.

When play finally restarted, things became a bit ragged from a Dundalk point of view and they were left with a mountain to climb when when O’Donnell was booked for a second time in the 71st minute for taking down Ridgeciano Haps, leaving Dundalk to play it out with ten men.

AZ tried to ram home their numerical advantage and Rogers had to make a great double save to deny Johansson and then substitute, Illias Bel Hassani. Andy Boyle then hacked a Luckassen effort off the line as Dundalk found themselves penned in.

Kenny emptied his bench and two of his subs came up trumps. Chris Shields’ rampaging run on the left was ended unceremoniously by Mattias Johansson and Horgan’s free-kick picked out Kilduff who did the rest to score his very first European goal.

Nine agonising minutes of stoppage time followed with Boyle, in particular, standing like a colossus as Dundalk saw it out to spark incredible scenes amongst the 800 plus travelling supporters at the full-time whistle.