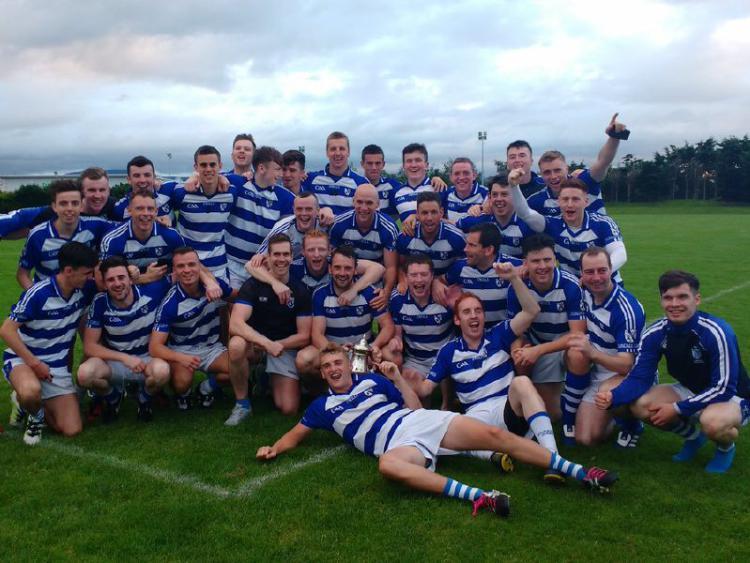 Dundalk Gaels booked their place in the semi-finals of this year’s Louth senior football championship - and a date with town rivals Sean O’Mahony’s - following this hard fought and enthralling encounter on Thursday night.

A minute’s silence was observed by all in attendance in respect of the recent death of Marian McGinn, mother of Blues captain Hugh and physio Vicki.

The Gael’s started brightest and the opening three scores of the game came from the Dundalk men. Jason Clarke’s two points were separated by one from team captain Derek Crilly.

The Blues at this stage had hit three wides before they finally got off the mark with one apiece from Conor Brannigan and Kieran Downey. David Moloney responded for the Gaels before two points from the Drogheda men in quick succession levelled the game for the first time with 16 minutes gone in the first half.

The first real goal scare came following a Gerard McSorley effort which dropped short and was tipped by the Blues keeper towards the back post before the Blues defence gathered the ball ahead of the onrushing Errol Boyle.  The Blues went ahead through Downey before Crilly’s second of the half brought the Gaels level again.

A period of dominance for the last 10 minutes then began for the favourites who scored 4 points in succession the final point being an own point by Jamie Faulkner who fisted the ball over the bar following a long ball in by the Blues midfield. This period also saw the first yellow cards of the game produced with one apiece to either side.

The Blues went in ahead at half time by four and were the more efficient in front of goals having not missed an effort since their third wide early on with eight consecutive successful scores along with Faulkner’s effort.

From the restart the Blues won the throw in and launched a dangerous ball into the Gaels square which veteran goalkeeper Paul Burke did well to gather. The opening score of the second half came via the boot of Clarke following a booming 45’ before Colm Judge quickly responded for the Blues.

McSorley finally got off the mark with his first successful effort of the game followed by a Sean Fee point to leave the Gaels behind by two with 10 minutes of the second half gone. The decisive score came in the 40th minute and it came via the inspirational captain Derek Crilly.

Following some good work on the wing by the Gaels, the experienced David McComish launched a dangerous ball into the Blues goalmouth which was expertly punched to the net by Crilly. For the first time since mid-way through the first half, the underdogs had taken the lead, once which they fought tooth and nail to keep.

The Blues responded through substitute Ross Nally and a flurry of substitutions on either side ensured the high tempo remained throughout. With the game now level entering the final five, Gaels sub Kevin McArdle put Ramparts men ahead by one before Moloney added his second of the match to give the Gaels a two point cushion.

The Blues continued to press and saw a late effort go into the side netting before they received one last free on the Gaels 45’. A high ball into the square eventually went wide and this was followed by the sound of referee Brian Brady’s whistle to put the Gaels through to the semi-final for the second time in three years.