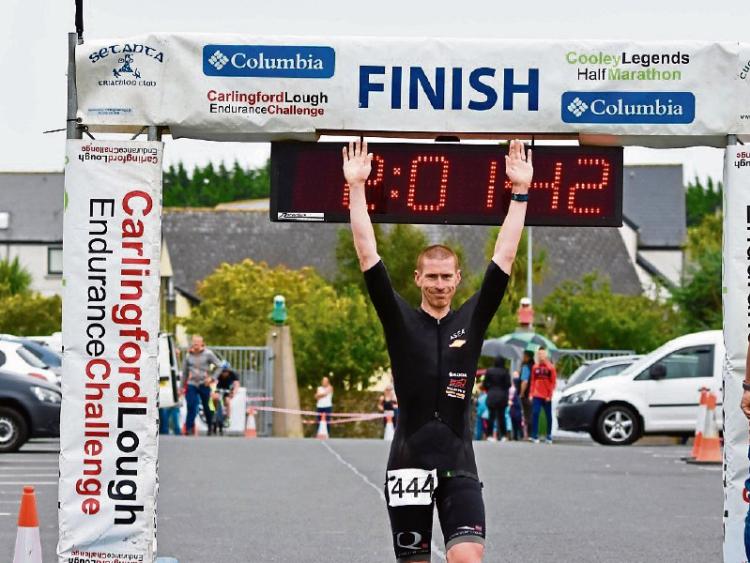 BRUCE Springsteen once said at a gig in Belfast that every town needs a Ferris Wheel. Carlingford is more of a village, but Bruce would be happy to know that the ferris wheel in Carlingford created a dramatic backdrop on a beautiful August Sunday morning as triathletes from all over Ireland made final checks to their bikes and equipment ahead of the 1:30 PM start to the Setanta Olympic distance Triathlon.

The swim conditions looked perfect from the shore for the 1,500m two-lap swim course, but the sting in the tail was a strong current which made for testing swim conditions. On the first lap, Bryan McCrystal, Maceij Brumm and Heather Foley matched each other stroke for stroke and, at the end of the swim, McCrystal and Brumm posted identical times closely followed by Heather as they headed to T1 to start the bike leg.

The bike course took the competitors north from Carlingford through Omeath, turning left at Davey’s and the sharp climb into the Long Woman’s Grave. From there, with the climbing done, it was down Glenmore to Bush and back to Transition at Carlingford Sailing Club.

McCrystal of Team Asea posted the second fastest bike leg with Sean Featherstone of Newry Tri Club finishing the bike leg in a very fast time to climb up the leader board coming into T2. Peter McConville from Newry and Brendan Buck from Wicklow Tri Club all posted times under one hour for the hilly 40K bike ride which is impressive in such windy conditions.

By the time the triathletes left their bikes behind to begin the 10K run, the weather had changed to light rain which made life difficult for spectators but may have been welcomed by some of the competitors. This year, the run leg was changed to a two-lap 2.5K out and back which meant spectators got to cheer on the competitors as they returned to transition twice during the run. This also resulted in some fast times and Setanta’s Niall McCabe and Brendan Buck posted the fastest run times with 38:19 each for the 10K. In the end, Bryan McCrystal from Team Asea and Setanta crossed the line to win this race for the third time, in a time of 2:01:40. Having finished Ironman 70.3 Dublin last weekend in second place overall, it was great to see Bryan continuing his incredible season with this win on home soil. Maceij Brumm finished second in 2:05:43 with Brendan Buck placing third in the Mens’ race in 2:06:40. Heather Foley, Olympian Tri Club, a regular and very popular winner of Setanta races in recent years, won the Ladies’ race in 2:06:07 and third fastest overall time of the day. This was also Heather’s third time to win the Carlingford Olympic race. Sean Featherstone of Newry Tri Club and Setanta’s John McDonnell finished 5th and 6th overall. The Ladies’ podium was completed by local favourite, Celine McPhillips from Drogheda Tri Club and Virginia Murphy.

Sincere thanks to our sponsors Chipit.ie, O’Brien’s Sandwich Cafes, Amphibia and Base to Race. Finally thanks to our marshalls, kayakers and Dundalk Order of Malta for ensuring a safe and very enjoyable race.