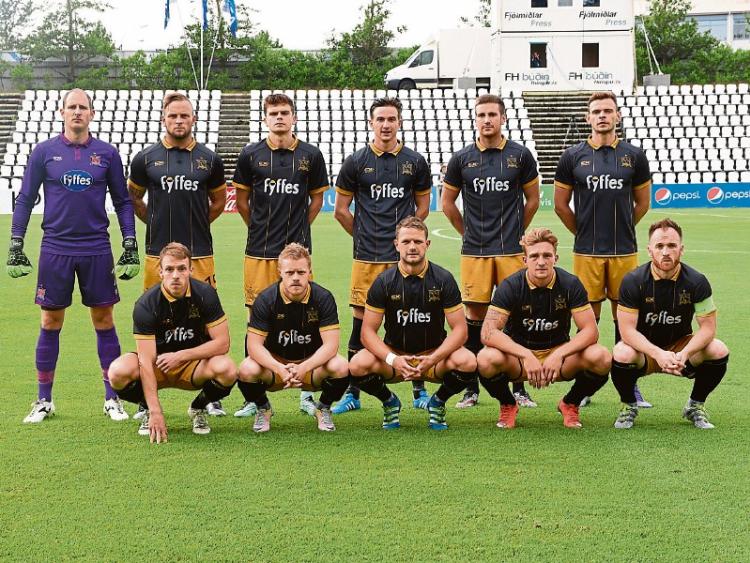 Dundalk go into the lion’s den of the Polish Army Stadium tonight knowing that they will have to become the first League of Ireland side in history to overturn a two goal deficit from the first leg if they are to keep their dreams of qualifying for the Champions League group stages alive.

A controversial Nemanja Nikolics penalty, followed by a stoppage time Aleksandar Prijović goal in last week’s first leg at the Dublin Arena has left The Lilywhites with a mountain to climb against Legia Warsaw.

Dundalk boss Stephen Kenny is aware of the sizable task in front of his troops but, speaking yesterday in the Polish capital, he said that if his players go down, they will go down with a fight.

“It would not just be one of the best results in Irish history if we pull this off, but I’m sure it would be up there in terms of comebacks in the Champions League, coming from two-down to qualify.

“But I do feel that there are various ways we can approach the game. There is a consensus that maybe we should try and keep it 0-0 for a long period and in the last 20 minutes see if we can penetrate and have a go but that’s not in my thinking at all.

“I’m thinking that we have to do something remarkable. We are going to have to play brilliantly. I understand that playing that way that there could be consequences, I’m not naive, but we will live with that and try to play in a way that takes the game to Legia Warsaw.”

Kenny has set his players the assignment of getting the first goal of the game, in the hope that it can silence the expected 30,000 Legia supporters in attendance.

He has experienced the effect that a goal can have on a fanatical crowd, turning his attention back to Dundalk’s Europa League tie with Hajduk Split in 2014.

Then, as with now, Dundalk lost the first leg 2-0 at Oriel Park and fell behind early on in the return leg at the Stadion Poljud but they went within a whisker of knocking the Croatia side out after scoring two second half goals.

“One thing that happens and it’s difficult to explain is the psychological shift that goals can bring. We experienced that in Split.

“Hajduk Split were comfortable and we were 3-0 down on aggregate at half-time but all of a sudden we got one goal and our players got an upsurge in confidence.

“They started backing off us a bit and then we got another goal and then suddenly they became so defensive in their thinking. They were clearing balls out of their box trying to hang on. That’s not down to a lack of talent or technique.”

Dundalk can take heart from Legia Warsaw’s poor home form this season. The Polish champions - who celebrate their centenary this year - have won just one of their six games on home turf and slumped to a 3-1 defeat against top of the table Arka Gdynia on Saturday.

Only one member of the team that beat Dundalk - goalkeeper Arkadiusz Malarz - was named in the weekend’s starting XI and the sounds coming from the Polish media is that Legia are ‘at the gates of paradise’ and expected to seal their place in the group stages of the Champions League for the first time since 1995.

“This is Legia’s big day to get into the Champions League,” stated Kenny. “When I visited Warsaw recently, there is a sense that this is their coronation. This is their chance to be in it for the time in 20 years.

“There is a feeling that is a procession. Even their league form was irrelevant. Their total focus is on this, this is what they wanted. They replaced their manager, who won the league last year, because they want to get into the Champions League. Everything has been focussed on this and we don’t underestimate that.”

Dundalk’s preparations haven’t gone as smoothly as Kenny would have liked. Striker Ciaran Kilduff did not travel to Poland after picking up a knee injury in training on Saturday and is anxiously awaiting the results of a scan to determine the damage.

Captain Stephen O’Donnell is suspended after picking up his third booking of the competition in the first leg and the Dundalk players have even had to contend with something of an unknown quantity on the training pitch.

“We had a good training session last night, about 20 minutes from Warsaw in a small stadium, after coming in yesterday,” said Kenny.

“The only issue we had was mosquitos! They annihilated us. We hadn’t planned that one - we thought we had left every stone uncovered but the mosquitos had a field day. We survived that, just about!”