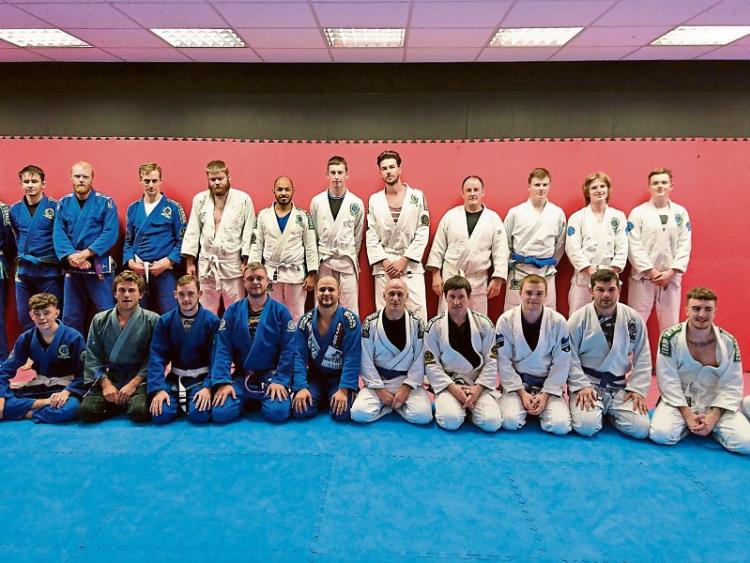 Members of Dundalk Team Torres Brazilian Jiu Jitsu were delighted to welcome the national chief instructor of Team Torres 'Sebastiao Torres' to their training base located in the Dundalk Combat Academy, on Coe's Road East, where he conducted a seminar which focused predominantly on strategies for taking an opponent down.

Following a brief Q & A session and also some submission drilling, the seminar ended with the grading of a number of individuals who received additional stripes; Ross Halpenny, Darren Mackin, Simon Dunne, Sean Myles, Patrick Purcell, Paul Whately, Barry Callan, Kyle Keating, Ian Traore, Davie Jones, and with one individual 'Thomas McGivern' , who is also a Black Belt and instructor in Judo, promoted to the prestigious rank of Blue Belt and thereby joining a very small select group of BJJ Blue Belts in the Dundalk Area.

The Dundalk team, in common with the majority of BJJ clubs worldwide, has a diverse membership drawn from all walks of life and backgrounds including engineers, managers, unemployed, solicitors, barbers, factory workers, accountants, trades people, students, etc., ranging in age from 16 years to 51 years.

According to the head coach of the Dundalk Club, Cormac O'Hanlon, he believes that one of the reasons for the broad appeal of BJJ is that "Unlike most other martial arts there are no punches or kicks allowed when drilling or sparring with a partner; locks and chokes are used instead to safely subdue the opponent.

It therefore makes it much safer when training because you’re not risking being knocked out or being seriously injured. This makes it eminently suitable for young and old, weak and strong, and male and female from all walks of life.

You are also training with a fully resisting opponent so you can be fully confident the moves that you learn actually work and in the process you are getting a full body workout". Dundalk Team Torres train on Mondays at 8pm, Fridays at 6:30pm and Saturday mornings at 12:30 with new members always welcome, you can check out their Facebook page 'DundalkTorres'.