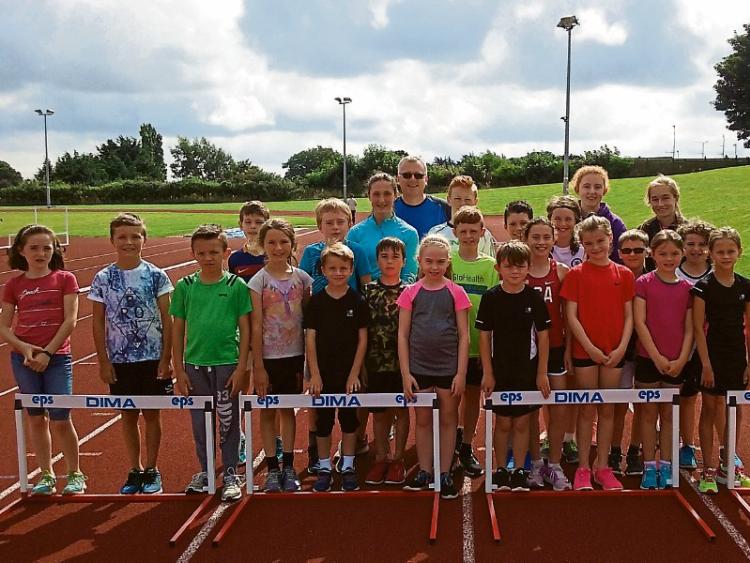 Friday evening last August 5th, through the streets of Carlingford in perfect conditions. The juvenile athletes were first to take to the road competing in various distances. Trophies and medals were given to the top 10 finishers in each race with plenty of smiling medal winners on the night.

Local clubs from Louth as well as Armagh, Down, Antrim and Cavan were seen to compete on the night. The finish line for all was the incline from Tholsel Street through to Newry Street making for exciting entertainment. The following are the top 4 finishers in each race:

This year’s 5k race, saw the number of entrants explode to over 450 athletes. The race itself did not disappoint, with Freddy Keron (Raheny Shamrocks) finishing in a time of 14.45, just managing to hold off he strong challenge of the Irish 5k champion, Conor Duffy (Glaslough Harriers) and Paddy Hamilton (Slieve Gullion Runners). It was testament to the quality of the field that the 1st twelve athletes all finished in under 16minutes(129 athletes under 20minutes). Brian McCluskey (North East Runners) was the first local athlete home in a time of 15.45 (9th place).

The under 17 and 19 athletes all featured prominently well up the field with Dillon Carolan (17.07) winning the Men under 17 race. Local athlete Caitlin Mulholland (St Gerard’s AC) won the Ladies under 17 race (21.35). The Under 19 events were won by James Smith (East Down AC, 17.36) and by Daire McCartan (Beechmount Harriers, 19.12). Glenmore AC athletes Katie Mallon (22.18) and Hannah Stewart (23.16) both ran very well and handled the 5km distance very well in these age categories.

29 Glenmore AC athletes completed the race, with Shane Toner winning the ‘Francis O’Reilly Perpetual Shield' for being the 1st athlete home in a time of 16.12 (16th place).

North Belfast AC men’s teams ran very well to finish 1st and 2nd in the team event, winning the Michael Fearon Cup. On the female side, the ladies from Drogheda & District AC done enough to win the ladies title and the Kevin Marron Cup, just ahead of the ladies from Newly City AC.

Glenmore AC would like to congratulate all the athletes who completed the race. A special thanks goes to the race sponsor Elite Physiotherapy, to the Red Cross, to the race starter Tommy Neary, John and Mary McGeown, and to all the volunteers who helped ensure the race was a success.

The Dunleer AC juveniles had a great outing to Carlingford for the Glenmore AC annual road races with super victories for Vanessa Brennan under 11 and Grace Fitzpatrick under 13. Dáire Mathews and Tiernán Rowley both raced to silver under 9 and 13 respectively. Others to do well were Conor Brennan 4th under 9, Lucy Sheridan under 11 as well as Matthew Fitzpatrick, Aeyla Orr, Seán MC Evoy, Benny Casey, Ciarán and Evan Logue.

On the senior front there was much to celebrate with Nicola Welsh and Karen Costello running sub 20 minutes with Nicola doing 19.24 and Karen 19.54, and backed by Nicola Courtney and Jacqueline Matthews for 5th team in a very competitive 24 team event. Best of the men was Pat Fitzpatrick in 17.23 just ahead of Anthony Connolly running a personal best of 17.25. Fit4Life runner Liam Healy with 22.34 had a personal best also as did Barry Mc Ginn 23.29.

Dunleer AC athletes Niamh Connaughton, Emma Cheshire, Seoda Matthews and Liam Connaughton were delighted to compete on the Louth team at the final of the senior track and field league in Tullamore last weekend. Louth qualified through the rounds for both the men's and women's finals for the first time and competed well against teams from all over the country.

The 12th running of the Alec Fennell 5km, sponsored by Cullen Auto Parts, saw an International flavour added to the event as USA Athlete Sidney Hirsch won the Ladies event in a course record of 18.30 mins.

Sidney is visiting Ireland with Boyfriend Tómas Cotter who represented Ireland at the recent European Athletics Championships in Amsterdam in the 3000m Steeplechase event. There was a double celebration for the couple as Tómas also won the mens event in the second fastest time ever in 15.30mins. Tómas competes for Dunleer AC while not on International duty and this was his first time running the event.

Both Tomas and Sidney were presented with their prizes kindly sponsored by Mint jewellers as all money raised fronm the event goes directly to Charity with this year’s chosen charity being The Maria Goretti Foundation in Lordship. Second place went to 6 times winner Brian McCluskey who was returning from a long layoff due to injury. With nearly two hundred competing then we are indebted to the club family and friends who cooked and baked the refreshments for after the event, and even to the lads who took the lazy way out and bought the buns on the way.

Thanks to DKIT Canteen provider SGE for refreshments and to Last Lap Café. Thanks to DKIT Sports and Societies Office for use of the grounds and to all Club Officials and friends who helped to mark the 5km course around the trail and sportsfields.

The track season continued with the Louth Championships with over 40 medals won by the club in a wide range of events. Simon Allen produced the run of the night with victory in the senior 3000m event with a tremendous last lap. Full results on the Athletics Louth website. Next event is the Drogheda + District AC Graded League event on Thursday 11th August.

This can be used by athletes to finish their preparations for the upcoming National Masters Championships in Tullamore on 22nd August.

The road racing season seems already over populated with events, so it was great to see a large turnout at local Athletic Club events with the Club winning both the ladies and mens team sections at the Dunleer Four Miles event.

The Michael Fearon 5km promoted by Glenmore AC in Carlingford saw the club well represented with the mens team coming third and the ladies in fourth place. Full results on www.myrunresults.com

Tuesdays at St Helena’s Park; New comers welcomed at 6.15 pm start time. Experienced runners at 7.00. All sessions free for club members or €2.00 for guests. ; Thursdays at DKIT 6.15, one session for all, at DKIT Sportsfield. Check the club Facebook page first as we sometimes go to Drogheda for track sessions.