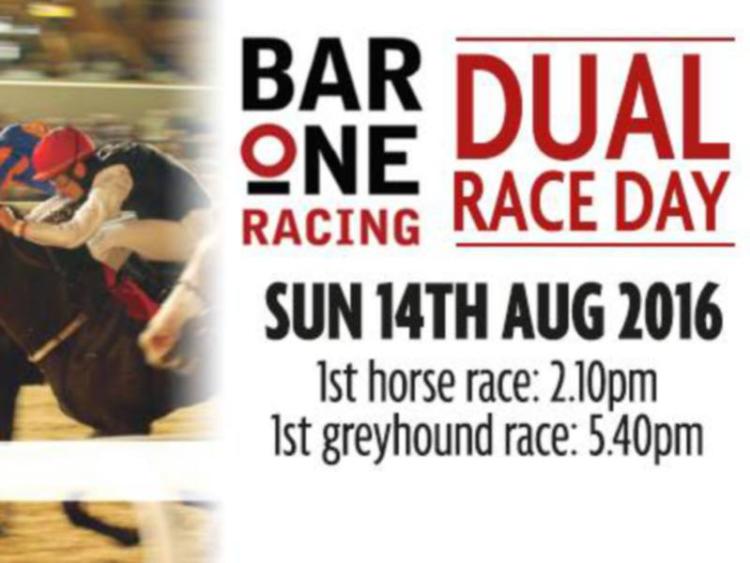 Having rediscovered the winning touch – albeit after only a very short period without it – Ballymac Bigmike is certain to go off favourite for the Bar One Racing Irish Sprint Cup final, the main event on the second half of next Sunday's sporting extravaganza at Dundalk Stadium.

Horse racing takes place at the Dowdallshill venue in the afternoon, to be followed by a greyhound programme which will have minor competition finals and open races – the first of them going off at 5.40 - as a support to the feature.

The winner of eleven on-the-trot and 21 in all prior to his shock defeat in the quarter-finals, Ballymac Bigmike showed he was back to his very best in last Friday night's penultimate round, dashing away from five and quickly building a decent lead going to the corner.

A slight drift off the rails as he turned for home saw the odds-on chance challenged by Nothing To Hide for the lead, but it was only temporarily. On straightening up, Ballymac galloped clear, winning by just over a length from the fastest finisher of them, Alfies Diamond, in a time that was only sixteen spots away from his own competition-best, 21.00.

The other qualifier was won by Laughill Ace, the Derry-based runner who has improved with every run in the €20,000 to-the-winner competition. Brendan Duffy's dog was first to show after a level break which featured each of the other runners, bar Lenson Rocky, drawn, not insignificantly, in trap one. The white-and-black nicked the bend off Drumcrow William and Maytown Flavour, before going on to score by just under a length in 21.24.

John Downey's Tullyallen representative, Catunda Dubai, was a non-runner here, having picked up an injury in the quarter-finals..

Ballymac Bigmike will start favourite to credit his Co Meath owners with a first Classic success and his trainer, Robert Gleeson with a second; but he could be at his biggest price since the competition began, a shade of evens perhaps being available. He's been drawn on the wide outside, and that, some students contend, may be detrimental to his chances.

However, whatever about the striped sheet being unfavourable – and the stats don't point to this being the case - a real no-no since the competition began, and, indeed, at most other times, is an inside draw. The unlucky one to be shown red in the draw made by Bar One's Barney O'Hare is Alfies Diamond.

There have been 24 races in the competition to date, and of the twenty-two in which the inside box was occupied, only one has gone to the wearer of the red sheet.

The Newry-owned and -trained Maytown Flavour has a sporting chance, while there'll be plenty who'll want to be on Nothing To Hide, given that the Limerick-owned dog represents the McGee kennel, the only one of the six to have won the competition in the past.

But notwithstanding the reservations expressed by some regarding his placing, Ballymac Big Mike, one of the most consistent sprinters this country has produced in quite some time, is taken to boost his win tally to 23 on his twenty-seventh outing.