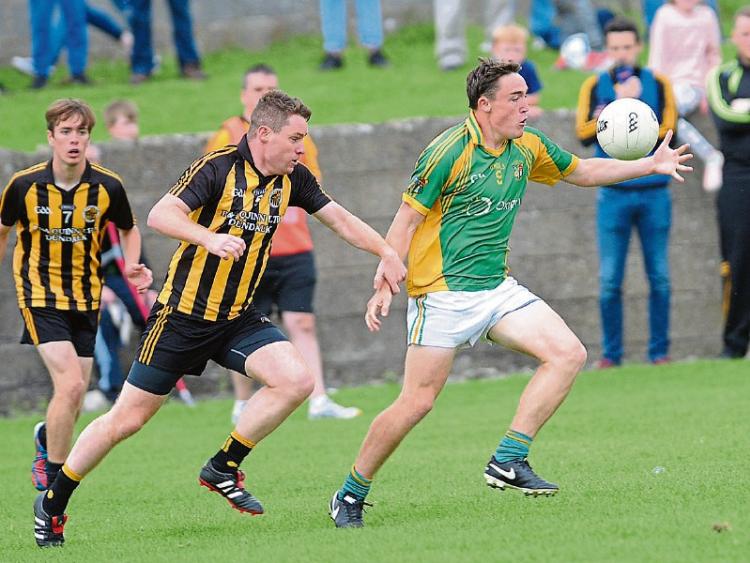 The Naps looked set for victory 13 minutes from the end when easily the best player on the field, Mark Larkin, put them five points ahead with a clinically taken goal.

That proved to be the Rock Road men’s final score as they wilted. The Finbarrs reeled off six unanswered points in the closing quarter to book their place in the knockout stages at the expense of their Dundalk opponents.

Bernard Osbourne’s personal tally of seven points included crucial long range frees, keeping his side in the game until eventually they took control. Conor Osbourne, Óisin McGee and Andy McCann were highly influential as the Togher side sealed the win.

The first half was generally very erroneous, and although it was quite end-to-end, both sides were naïve defensively with Na Piarsaigh’s blanket defence not yielding much in terms of building a lead.

The Finbarrs’ defence was equally as frail and on each occasion that Na Piarsaigh ran with purpose at their back six, they appeared vulnerable and inevitably scores and free-kicks presented themselves for Larkin.

Sean McAuley spurned a goal opportunity within three minutes for the Naps, however, the first major arrived within a minute of that incident. Larkin’s uncharacteristically weak shot was fumbled horrendously into his own net by ‘Barrs net-minder, Allan Matthews.

Cathal O’Hanlon’s side emerged stronger as the half progressed and Darren McConnon was proving hard to handle at full-forward. The former Roche man was the vocal point in attack and he scored the Barrs’ opening two points before having a hand in their next three as Bernard Osbourne began finding his range.

Osbourne’s sixth point of the half on 20 minutes was superb, in front of the Na Piarsaigh congregation, Osbourne delightfully drove over off the ground from within one metre of the sideline on the ’45, to send the reigning Junior champions into a two-point lead. At half-time the Barrs led, 0-10 1-5.

The blunt reality was that only for the poor concession of a goal, the Togher outfit would have led by double scores at the break, thus a reaction was required from Na Piarsaigh in the second-half, and they got it, again dominating the opening exchanges. Points from Joe Woods, Larkin, Alan McCartney, Paul Mallon and an excellent team point converted by the lively Robert Murphy saw the Town side lead, 11 points to 1-10 with 46 minutes on the clock.

Thereafter the game appeared to have taken a defining swing. Darren McConnon blazed a goal effort wide at one end, before Larkin drove with conviction into the Road end goal posts to seemingly end the tie as a contest.

The goal came after Paul Mallon saw his shot ricochet off the hands of his marker, Patrick McGrane, before the ball ended up with the deadly Larkin who is surely a player Colin Kelly will be watching. His goal though proved to be the final Na Piarsaigh score as they struggled laboriously to the finishing mark.

Scores from Finbarrs’ substitutes Jack Butterly and Padraig Murphy along with Bernard Osbourne frees and a point from the excellent Conor Osbourne put a point between the sides with five minutes to play, at which point Cathal O’Hanlon took Andy McCann and Darren McConnon further out the field.

That alteration made a game-telling influence as both players won crucial kick-outs and offloaded well. Óisin McGee’s 57th minute strike drew affairs level, before Hugh Osbourne, relatively anonymous for the second-half illustrated why he is seen as a massive prospect by winning the match for his side with a delicate left-footed finish.

Na Piarsaigh lost their discipline as well as the match with Conall Shields receiving a black card, and David Boyle being directly dismissed after spending only four injury-time minutes on the pitch following a scuffle near the Finbarr’s goals.