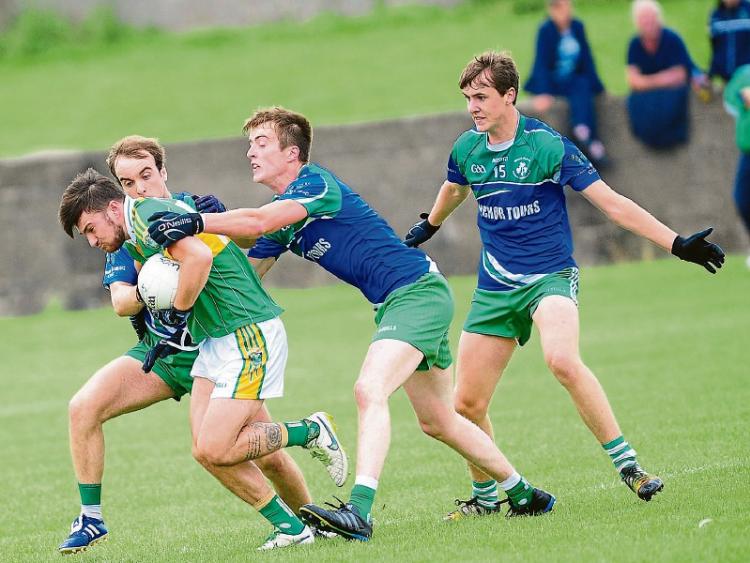 Sean O’Mahony’s avenged last year’s championship final defeat with a comprehensive four-point victory over a St. Patrick’s side who appear to be a shadow of their former selves in Dowdallshill on Sunday afternoon.

Stephen Kilcoyne and Keith McLaughlin starred for the Point Road men, proving elusive to the Pats’ defence while also contributing a combined total of one goal and six points in their four-point demolition of Jim Holland’s men.

The Lordship side were poor; their Joe Ward credentials will take a hammering after this performance. Karl White’s injury time penalty conversion took the bleak look off the score board, for a team which looked leaderless, toothless and hopeless in the absence of their talisman Paddy Keenan.

The defending county champions actually began the match well and Darragh Lafferty drew them level in the fourth minute with an exquisitely struck left-footed effort from 40 metres following Stephen Kilcoyne’s early free for the O’Mahony’s.

The Seans’ game plan was evident from the onset, hit Conor Crawley at full-forward, and so they began raining the ball on top of the monstrous target man.

By the tenth minute, the Sean O’Mahony’s held a two-point cushion thanks to a Conor Finnegan ’45, won on the back of Crawley causing havoc on the square, and a sublime raking effort by Kilcoyne with the aid of his left boot. He left Kevin Toner for dead on a number of instances during the opening period.

Lafferty closed the gap to a single point in the eleventh minute, three points to two. Thomas McCann and Lafferty soon put Holland’s men ahead though with two top calibre points. Firstly, midfielder McCann registered from 45 metres with the outside of his boot after good industry by Cathal Grogan, before Darragh Lafferty scored the point of the championship to date.

The Louth panellist took a quick free 40 yards from goal along the stand side-line, passing to Karl White before taking the return pass from the Pats’ captain. Following a brief survey of his options, Lafferty split the posts from the most acute of angles, along the side line while being harassed by opposing defenders. His prestigious talent is there for all to see.

The Pats wouldn’t score for another thirteen minutes though, by which point that O’Mahony’s had built up an advantage, five points for four.

The game changing incident arrived in first half stoppage time, when Conor Crawley punched to the net following yet another high delivery from out the field as the O’Mahony’s led, 1-5 to five points at the break.

The Green and Gold begun the second-half like men possessed. Ben McLaughlin kicked a superb point with the outside of the right on the re-start before Kilcoyne burst the net with an unwavering effort following Crawley’s clever knock down from Conor Finnegan’s umpteenth long ball of the match.

The Pat's hadn’t yet awoken from their half-time slumber as the Point Roaders, spurred on by their vociferous following, ruthlessly put the Pat's to the sword with a display of energy, hunger, purpose and determination.

They were totally dominating the midfield exchanges with Conor Martin and Shane Brennan robustly controlling proceedings. John O’Brien was assured at centre-back, while Barry O’Brien and Ronan Byrne tenaciously confronted the Pats’ forwards.

The 41st minute point by Keith McLaughlin summed the game up perfectly. Danny O’Connor picked the ball up nonchalantly on the right-wing and attempted somewhat imprudently to take on Barry O’Brien as the O’Mahony’s left-half ripped the ball aggressively away from him. John O’Brien picked up possession, bundled Conor Grogan to the ground and found Keith McLaughlin who was given the freedom of Dowdallshill to kick his second point of the contest. The Seans’ meant business, while the Pats appeared dumbfounded at the intensity of the Dundalk side.

Nine-points in arears, the Pat's required leadership and Ray Finnegan provided it with a sublime point, however, the stark reality of the situation was that it took the Pats 16 second-half minutes to score, while they only scored twice between the 13th and 49th minutes.

Danny O’Connor was finding it tough to get into the game, and the former Louth man was almost out of it having threw a petulant kick at Jonathon Connolly as he walked by, an incident disregarded by Aidan Dunne.

Keith McLaughlin and Kilcoyne continued to terrorise the Pats’ rear-guard, feeding symbiotically off Crawley at full-forward. Karl White persevered in giving his all for his side’s cause, but on a rare off day for the Pat's, they were second best all over the pitch.

They did rally late on to cut the nine-point deficit with White and O’Connor firing points before Darragh Lafferty won a penalty.

The rangy UCD student caught the ball superbly, turning Ronan Byrne inside and out before being dragged down for a penalty which White despatched with ease - 2-9 to 1-8 it finished.