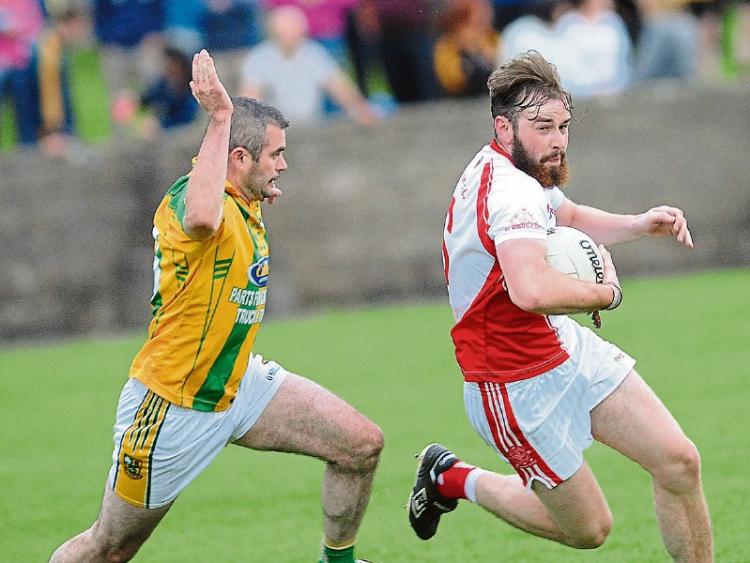 A potential blockbuster turned out to be a relatively tame affair as St. Brides knocked Clan Na Gael out of the championship with surprising ease courtesy of an inspired score-taking performance from centre-forward Emmett Kirk.

Kirk finished with a total of seven points, some of which were unerring with accuracy and purpose, as the evergreen Aaron Hoey came to the fore for Knockbridge in the second-half by winning a penalty and converting two pivotal frees.

In all, Clan Na Gael will be disappointed with their exertions in Dowdallshill last Friday. They never threatened to pull away from their youthful opponents when ahead, nor did they portray any instincts necessary to be able to pull themselves back into the game.

Although both sides opened the contest by converting frees via Mark McGeown and Emmett Kirk.

Billy Smith began the avalanche with a tremendous outside of the right shot from fully 45 metres, before Ross Keogh showed his marker, Kevin Carroll, a clean pair of heels before kicking exceptionally over from the right touchline.

The sides were soon locked at two points apiece through another pair of sublime points. Firstly, Mark McGeown went on a mazy run, jinking inside and out before leisurely scoring a point that oozed quality and assurance, before Knockbridge hotshot Kirk converted a ’45 with aplomb.

For the remainder of the next 15 minutes the match was quite difficult to survey with both sides keeping possession well, without offering much threat in attack. The Brides full-back line appeared to be struggling with the Clans two-man inside forward line comprising of Billy Smith and JJ Quigley, however, the Echo Road side didn’t capitalise until 26 minutes into proceedings, when they were two points in arears.

JJ Quigley pointed before half-time superbly, twisting three defenders before shooting sweetly over. 1-5 to seven points at the interval. Quigley smashed the cross bar on the re-start, before Kirk drew St. Brides level. The match changed on an instant three minutes into the second-half with the Clans rashly conceding a penalty which Patrick Reilly converted.

Conor Deane launched a high ball into Aaron Hoey, who showed all his experience in manoeuvring Leo Martin out of his path and having fetched the ball, Clans full-back, Martin, shoved Hoey to the ground, the penalty was the result.

Mark Newell and an excellent individual run and point by Michael McDonnell reduced the Brides lead to the minimum, however, with the Clans tail’s up, Conor Noonan hit a bad wide having looked certain to level proceedings.

The Brides took off from that point onwards. Their full-back line were now coping exceptionally well with the Clans arial bombardment as they continued building from the back. Kirk landed a skyscraper from the periphery of the Clans ‘45 to give David Reilly’s men a two-point lead, which Hoey (2) and Kirk soon extended to five.

The Clans failed to score from the 41st minute to the 59th, a baron spell which ultimately cost them a 2016 championship title tilt. Two late Conal McKeever frees set-up a grand stand finish, however, following two goal mouth scrambles, referee Declan Dunne ended the match with Knockbride advancing with a three-point winning margin.