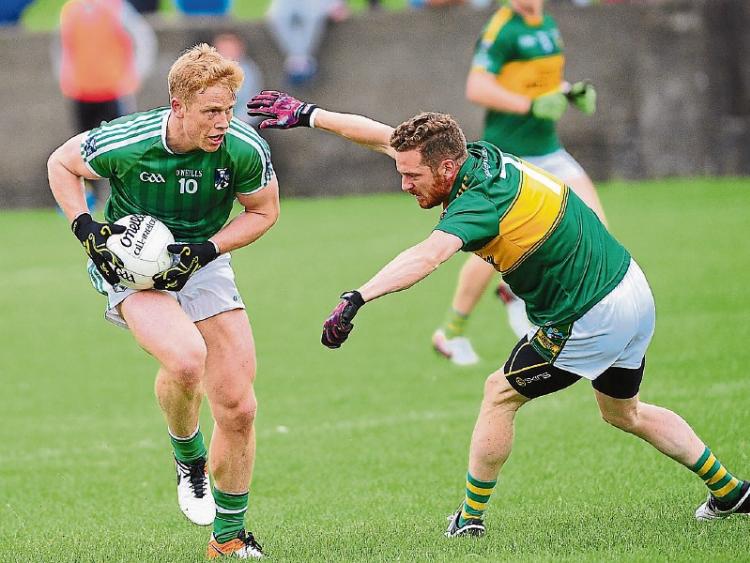 Jim McEneaney was the pick of the bunch as the Geraldines overcame Cooley Kickhams with ease in Sunday afternoon’s championship encounter in Dowdallshill.

The Louth star mesmerised Cooley’s sluggish defence, spear-heading every attacking move that the Gers put together, before finishing the match with a personal tally of 1-7.

Cooley did threaten to mount a comeback when they reduced the margin to the minimum five minutes into the second-half, however, in truth they seemed quite one-dimensional and with the Gers able to tag on scores at ease, a Cooley win never seemed plausible.

Shane O’Hanlon’s 42nd minute goal ended the game as a contest, and in the end the Gers ran out comfortable nine-point victors which sets up a quarter-final showdown with the Sean O’Mahony’s.

The Gers were dominant from the off and with the strong crowd still trickling into Páirc Naomh Bríd, Jim McEneaney set the Haggardstown men on the way with a sublime individual goal after three minutes.

McEneaney embarked on a 40-yard solo run, leaving his marker Peter Thornton in his wake before ruthlessly sending Neil Gallagher the wrong way to fire into the bottom right-hand corner at the road end goal.

Another incredible piece of score-taking by McEneaney sandwiched a brace of frees from Cooley’s midfielder Brian White. McEneaney, hugging the left touchline soloed with his left, before sharply turning onto his right and firing over a gem to leave his side 1-1 to two points in front with ten minutes played.

Cooley appeared toothless offensively with dead balls appearing to be their only method of scoring. Their defence appeared very open with McEneaney and Conal Hoey pouring through on each occasion that an opportunity presented itself, indeed it took a great save by Neil Gallagher to deny Glen Trainor a three-pointer after good play by Hoey.

Cooley scored their sole point from play in the 12th minute, an excellent strike by Michael Rafferty from the right-wing. Cooley wouldn’t score again until five minutes before the interval when Conor Rafferty pointed a free-kick.

In that intervening period, tempers began to flair with three yellow cards and a black card being issued. Cooley’s loss in concentration and discipline allowed the Gers to extend their lead to three points minutes before the break.

However, it would be a mistake to think that the Haggardstown men were applying a vintage performance, with their discipline also being questionable. The Gers were getting it tough to hold the ball with the slippery conditions intensifying as a consequence of the rain prior to half-time, although they were well worthy of their lead at the interlude.

Cooley emerged strongly after half-time, substitute Thomas McGuinness had a glorious chance to goal following strong running by Darren Marks before frees from Patrick Sheelan and White cut the deficit to a single-point, while Michael Rafferty missed a glorious opportunity to level matters moments later.

The comeback never seemed viable though as the Gers pushed on when they needed to with McEneaney an irrepressible outlet for his team. His poise, balance and ability to strike seamlessly with either foot was the feature of a pretty lacklustre match.

The Gers’ captain pointed twice, either side of a Michael Rogers notch in a three-minute spell before Shane O’Hanlon ended the contest emphatically with a powerful finish to the net.

Sharp and intelligent interplay between McEneaney, Conal Hoey and Shaun Callan saw the ball transferred to O’Hanlon, lurking on the penalty spot, and Seamus’ son drove high to the net, giving his side a seven-point buffer.

Darren Kearney pulled off a fabulous save moments later to maintain the Gers comfortable leading margin, before O’Hanlon drew a wonderful tip-over save from Gallagher as the Gers continued to forge a winning lead.

Cooley continued taking the wrong options in forward areas, opting incessantly to go for goals when they were not readily presenting themselves, Gareth Neacy, Nicky Mackin and Kearney were in no mood to concede.

The Peninsula side’s big players like Brian White and Conor Rafferty were fairly anonymous throughout, in contrast to the Gers’. McEneaney continued to convert outstanding points while substitute Matt Corcoran added energy to the middle third, providing two notable interceptions upon his introduction for Stephen Reidy.

The final act of the match saw Patrick Sheelan attempt to drill an effort into the net from a 14-yard free, however, unsurprisingly it was McEneaney who blocked the shot as the Gers ended Cooley’s Joe Ward aspirations for yet another year.