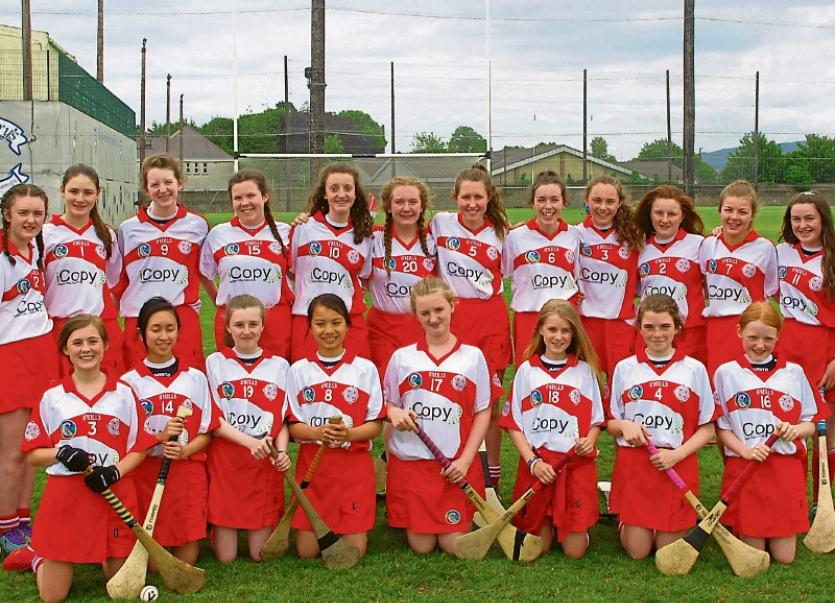 Camogie is definitely going from strength to strength in Louth when newly registered club, Blackrock teamed up with their long established neighbours St Brides to take part in this year’s Camogie Feile competition.

The Feile finals are held annually for Hurling/Camogie and football and attract under 14 teams from not just every county in Ireland but also nywhere in the world, wherever there are GAA and Camogie clubs.

Having beaten a very strong St Kevins team in the Louth Final, the Blackrock/St Brides combination had to raise significant funds to pay for the three day trip, which this year was held in Tipperary.

The two clubs formed a single fundraising and organising committee and were every bit as efficient off the pitch as the players were on the pitch. A great cross parish bond was established and worked very well.

A bag pack and a quiz night were organised with the players rolling up their sleeves to get involved. Generous sponsorship was raised with special thanks to BHK credit union and Joe Cunningham associates. The girls all received a tracksuit and top which is theirs to keep.

On Friday 17th June, the team accompanied by coaches Joe Cunningham and Tony Morgan as well as a small army of mentors, parents and supporters all headed off for Tipperary, which as the song goes, “is a long way”. We were based in Ballybacon, Ardfinnan which is about 10km from Cahir.

Set in a lush valley, situated between the Galtee and Knockmealdown mountain ranges, the scenery was stunning. The Ballybacon/Grange club which caters for Hurling & Camogie had a perfect playing surface where the sliotar would run a great distance with any sort of a decent poc.

The girls, all from Blackrock, Knockbridge or Dundalk were all hosted by local families of girls who were also taking part in the competition.

On Friday, they played two matches against St Marys of Clonmel and St Lazarian’s of Abbeyleix, winning the first match comfortably, only to lose the second by a last minute goal. Once the matches were over, the girls quickly checked in with their host families and then off to Clonmel for one of the Feile highlights, “the Parade”. Whilst they may not have come away with any silverware, the girls from County Louth will be long remembered as the Loudest (and Proudest) and most musical of the participants. At one stage, the girls had persuaded many of the other teams to join in their songs.

Saturday saw them take on the host club Ballybacon/Grange in a crucial match which was finely balanced. Every ball was battled for and every poc was blocked. In the end, the Tipperary girls prevailed, in a thoroughly enjoyable, end to end encounter.

Although beaten, they still qualified for the quarterfinals later that day in Clonmel.

This time they were up against St Eunans of Donegal. Although they did not get the best of starts, the girls dug deep for every bit of energy but in the end, lost only by a single goal. St Eunans went on to win the Shield competition.

They had played four matches in 24 hours against great opposition and improved their game skills and experience. Roll on the Louth championships.

At the end of Saturday, all of the Hurling and Camogie teams which were based in Ballybacon attended a disco which by all accounts was a great night. A separate event was held for the mentors and parents.

Departing on Sunday, the host club presented Blackrock/St Brides with a commemorative plaque. Before the girls left, Brendan Cummins, former Tipperary goalkeeper, All Star, twice All Ireland winner and nine times poc fada winner, spend time with them, chatting and posing for photos.

Great friendships were forged on and off the pitch and I imagine that we may see Ballybacon visit for a few challenge matches.