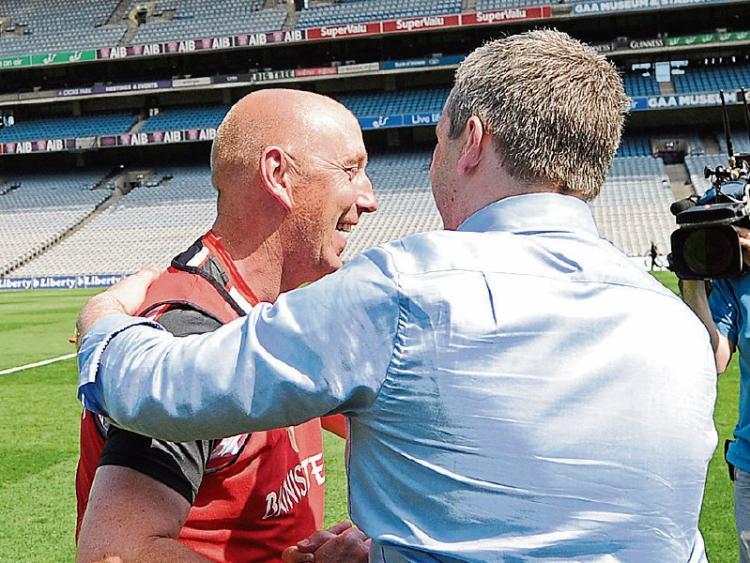 Louth manager Dee McCarthy was understandably elated at the conclusion of Saturday’s Lory Meagher Cup Final and he spoke to the Dundalk Democrat about the thrilling conclusion to a very positive year for Louth hurling.

McCarthy and his management colleagues made two substitutions during Saturday’s final which helped to swing the game in Louth’s favour. The introductions of Andrew Mackin and Seaghan Connelly had a huge baring on the result of the match as the pair contributed a total of 2-2 in a frantic final quarter to inspire the Reds to a superb comeback victory.

McCarthy was conservative when asked whether his decision to introduce the pair was turning point in the game, rather he insisted that it was the players themselves that produced the stirring comeback.

McCarthy said: “We made a couple of changes, Andy Mackin and Seaghan Connelly came on and made a big difference. We’d like to think that the boys dug deep and we encouraged them at half-time to take the chance and not regret their performance after the game.

“We never doubted the players and we believed that they could turn it around because there is great spirit in the group and they showed that along with great heart to turn it around and win it.”

Having trailed Sligo by eleven points with 18 minutes remaining, Louth’s chances of gaining a first piece of silverware at Croke Park looked bleak, and McCarthy admitted that it wasn’t looking good for his side at that point.

“Yes, we were kind of thinking that this is not going to be our day, but the spirit that the lads showed was tremendous and typical of who they are.”

Liam Dwan’s 68th minute goal from a 21-yard free was the score that sparked the late avalanche of goals for Louth, with Mackin and Shane Callan following up with three-pointers of their own soon after.

Tipperary native Dwan went for goal having looked for permission from the side line prior to taking on the shot, and according to McCarthy, he had to go for it.

“Liam Dwan looked over at us and asked what to do, and we said go for it because points were no good to us at that stage. Once he got it we knew that we had them because Sligo looked to be tiring.”

Louth hurling stalwarts Shane Callan and Diarmuid Murphy finally got their hands on a major prize at GAA HQ having lost four previous finals at the venue. They really drove on the team in the second half and McCarthy believes that they were game changing influences on the pitch.

“The boys (Shane and Diarmuid) have been there for years and have lost finals with Louth. The pain of those defeats are hard to take and maybe it was that pain drove them on to exercise the demons of those losses.”

McCarthy paid further tribute to his side as he claimed that they have “elevated hurling to a new level in the county. Even the Sunday Game were talking about us which is something that hasn’t happened before.”

Louth now face Fermanagh in a repeat of last year’s promotion/relegation play-off as they seek vengeance for that defeat, while attempting to regain their place in the Nicky Rackard Cup for 2017.

“Yes we have another game next Sunday against Fermanagh. We will be back training Tuesday night and unlike last year we will go into the game with a bit of momentum behind us and hopefully win the match.”

The year as a whole for Louth has been a very positive one. Having finished third in Division 3A in the National Hurling League and missing out on a play-off for promotion and the league title on score difference, McCarthy’s Louth won the championship with a 100% round-robin record.

“It has been a very good year for Louth hurling. We have won eight out of ten games this year and we really can’t ask for much more than that. Compared to last year when we won one game the entire year, there has been big positives from 2016.”

McCarthy has now served the three-year stint that he was given in 2014, and his future has not yet been decided, but he admits that family commitments will be a central part of whether or not he seeks an extension to his term in charge.

“I’ve done my three years and I haven’t been asked as yet to stay on, so we’ll see how it goes.”