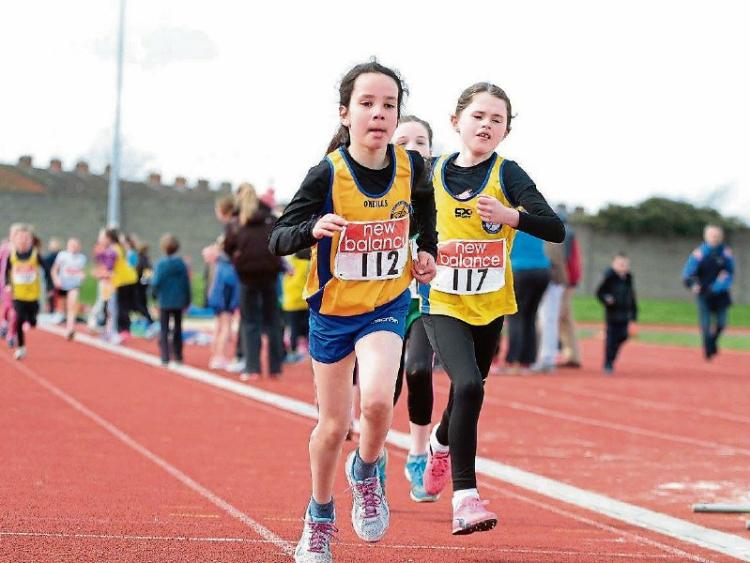 As we all know the weather in Ireland is special. Four seasons can make an appearance in one day and you can be both sunburnt and hypothermic at the same time.

The latter of these two uniquely Irish scenarios was the backdrop to the pre Louth track and field championships held in Drogheda recently.

The wind swirling around the Lourdes stadium could chatter the teeth of any of these hardy athletes and yet the spring sunshine that accompanied it added many new freckles to young faces in the midst of serious competition.

And there were many young faces indeed as the numbers who attended this year were huge. Blackrock AC alone had 55 kids in attendance and with all the other athletes there and all the events that were covered it was a very long day in sunny shivery Drogheda. Running, long jump, javelin, shot put and relay races were all events in which the Blackrock crew trained for and competed in on the day.

It has become quite a habit among this lot to return home with medals and this day was to prove no different. However, as we all know it is not only medals we celebrate but good performances and in that we had much to celebrate. Everyone from the club who took part put in terrific efforts and the club is rightly proud of each and every one of them.

In one of the earliest races of the day young Grace Reilly took off at high speed and ran a fantastic race to cross the line in second place in the u9 girls’ 60 metre race. She added to her tally later on in the 500 meter race by again taking home the silver medal and completing a wonderful day’s competition for this young athlete.

Blackrock AC wouldn’t be famed as a javelin throwing club but it was in this event that the club won one of its first gold medals of the day. Ciara O Brien took the top podium spot in the u12 turbo javelin competition with a mighty throw of 19.12 metres. Alex Bewley, who is better known for her terrific running speed, took the silver medal in the same event with a very impressive throw of 16.9 metres to make it a Blackrock one two.

The u10 boys’ 80 metres sprint saw the rocket powered Ralph Tinsley thunder home to first place in tough competition to claim his gold medal. The Bewely household saw its second silver medal for javelin on the day when Keelan Bewely matched her sisters’ performance to win silver medal in the girls’ u10 turbo javelin event. The triplet of silver medals was finally completed when Alex ran a superb race in the u12 girls’ 80 metre race to take second podium spot and make it a very productive day all round for the Bewely clan.

Sean Reilly ran a fabulous race in the boys’ 80 metre sprint in the u11s to grab the bronze medal and won another bronze in the long jump. He went one better in the 500 metre race to take home the silver medal to complete a magnificent day of competition for the young man. The u13 girls 80 metre sprint saw Kendall Kamtmchou maintain her terrific form of the year when she took the bronze medal in her race.

Tuesday night is long jump training night at the community centre with coach Scanlon and clearly the work being put in is paying dividends. Faye Tinsley had a look of intense focus as she hurtled down toward the sand to jump her way to a bronze medal in the u13 girls’ long jump. Hannah Reilly jumped her way into the bronze medal spot also in the u15 long jump competition and improved on this podium spot in the 100 meter race by crossing the line in second place and taking the silver.

Kelly Breen showed that she is equally comfortable in both long and short distance running when she won silver medals in both the 100 metres and 800 metre races at u16. Aaron Spaight ran a superb race to take the silver medal in the u13 600metre race for the boys. The u14 girls’ 800 metre race saw the incredibly determined Neasa Reilly win gold medal in a race she is proving very difficult to beat in.

Aoibhin McMahon, who is the national record holder in the shot put at u14, never looked too worried in Saturday and it seems she had no reason to.

With another exceptional performance this mighty athlete took home another gold medal for herself and her club and the weight of her ever increasing tally of medals is surely making the shot put itself seems feather light.

The McMahon household was far from finished though as older sister Shauna had to step up to the toe board in the u17 shot put competition. Shauna put in a magnificent performance at the national indoor championships a few weeks ago to win a bronze medal and she looked to maintain that high standard. Her throw on Saturday won her the gold medal while coach and dad John beamed with pride as his two daughters dominated this event.

The relay races proved a fruitful hunting ground for the club as both the boys and girls teams brought home medals with all competitors running excellent races. The u8 boys took silver medal. The u9 girls equalled the boys’ performance. The u10 buys ran in third to claim bronze. Two teams ran in the girls’ u11 race and just missed out on a podium spot by getting in 4th and 5th.

The u12 buys ran great to come in 5th in very tough competition. The u13 girls won a bronze medal on the day with 2 teams in the girls’ u15 race coming in 2nd and 4th.

The large number of entrants on Saturday meant that the competition was fierce.

The performances of all the athletes from Blackrock were a source of great pride to the club and the kids not only put in herculean efforts on the field they had great fun as well. Keeping healthy, friendly competition and having fun………………….isn’t that why we all do this? Well done everyone.