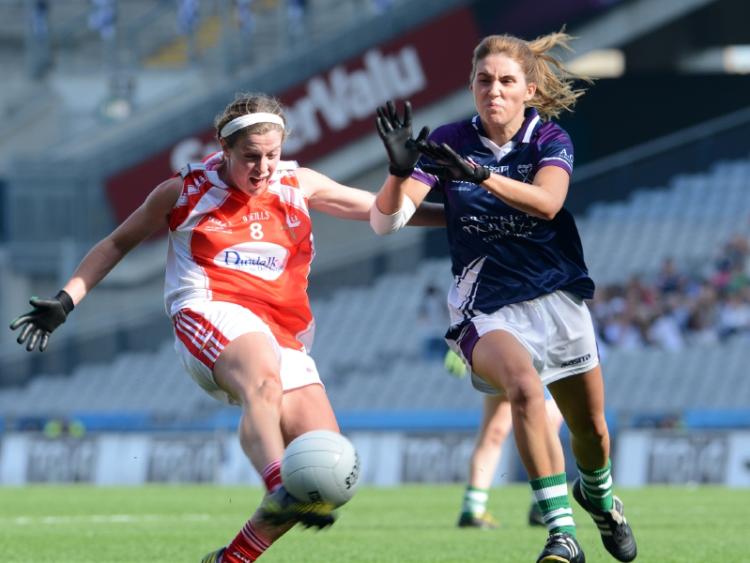 Louth Ladies stalwart Grace Lynch has called time on her inter county career after 16 years in the red shirt.

The Stabannon Parnells player won a number of medals with the Wee County, including an All Ireland Intermediate title in her debut season of 1999 and last year, the All Ireland Junior Championship.

The Louth Ladies County Board released a short statement on its Facebook page to confirm the news, praising Grace for her contribution to ladies football in the county.

“We are sad to announce the retirement from inter county football of Grace Lynch,” it read.

“Grace has been on the county panel since 1999 and has always been an inspiration and a true leader to her fellow players. She will be missed as she was certainly one of the best players the Wee County has ever had.

“We wish Grace the very best of luck with her club Stabannon Parnells and thank her for her loyal service to the Louth Ladies over the last 17 years.”

Grace will continue to play with Stabannon’s Ladies team and the mid-Louth outfit were also quick to pay tribute to her achievements with Louth.

“The word legend can be thrown around regularly but one person who deserves this title more than anyone is Grace Lynch,” said Stabannon Ladies PRO, Aine McBride.

“Grace gave outstanding service to Louth, starting her career in 1999 and going on to win the All Ireland Intermediate Championship the same year. Ever since, she she has continued to give 100% to her county, through the highs and the lows.

“She never left anything behind on the pitch and her efforts did not go unnoticed as she won her place on the National League Team of the Year on a number of occasions, as well as representing her county several times at Interprovincial level with Leinster.

“Grace is a true leader and has this ‘never give up’ attitude that a lot of players can learn from. Stabannon is very proud of her and that amazing engine she has and we are very lucky to have her as part of our club.

“I don’t think anyone in the county will argue when we say that she is one of the best footballers this county has ever produced - male or female!

“We wish her all the best in her retirement from inter county and look forward to having her in Stabannon more often,”she added.