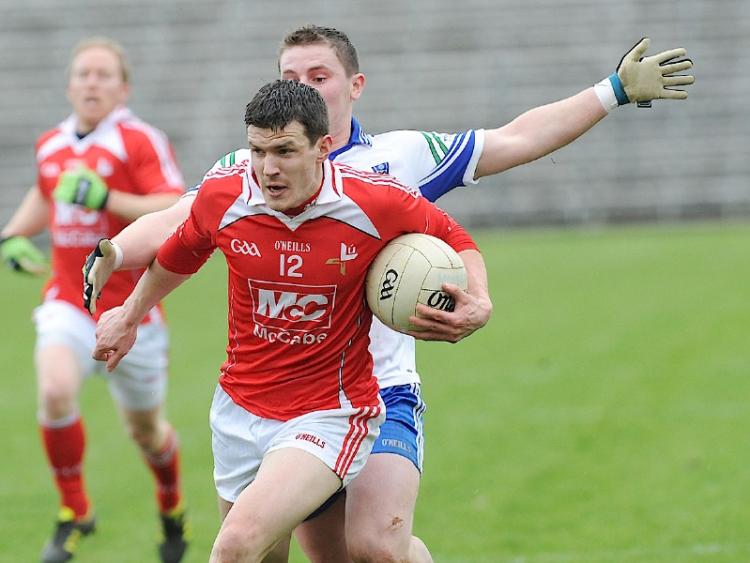 Adrian Reid will become the latest member of Louth’s ‘100 Club’ when he leads the Wee County out against London in their Allianz National Football League Division Four opener in Drogheda this Sunday.

Although he was part of the panel in 2007, the Mattock Rangers man’s first appearance in a red shirt came in an O’Byrne Cup tie with DCU in January 2008 and since then he has been a mainstay of the county team.

“I knew that I wasn’t too far away from the 100 mark but I didn’t actually know it would be this Sunday,” he told The Dundalk Democrat.

“It’s a great honour to represent your county. To do it 100 times is special and the last appearance is just as important as the first.”

Reid’s inter county career has had its fair share of drama. The Leinster Championship run of 2010 - and the subsequent debacle in the final - was a rollercoaster ride of epic proportions.

Louth recovered from the trauma of that day to win promotion to Division Two the following year but five years on the county is starting from ground zero.

Relegation to Division Four last season means that Reid will captain the Wee County in their first ever game in the bottom tier and, like everybody associated with Louth GAA, he hopes the stay is short lived.

“This will be my 10th campaign and you’re right, there have been some high points and some low points,” he said.

“We are perceived as one of the weaker counties but for a lot of those years we punched well above our weight. Now I feel we are punching well below our weight. We simply have to get out of Division Four.”

A bright pre-season means that there is a new sense of optimism going into the league campaign.

The pre-Christmas O’Fiach Cup competition offered Colin Kelly’s young guns an opportunity to test themselves against Ulster giants Armagh and Tyrone and victories over Kildare and DIT in the O’Byrne Cup have lifted morale around the county.

“We deserved to beat Armagh in the O’Fiach Cup and we went toe to toe with Tyrone in the first 25 minutes before their class began to tell,” said Reid.

“For the younger lads, the experience of playing against teams like that is invaluable. They showed no fear and they have really bought into an ethos of working hard which is something we probably let ourselves down on last year. The attitude now is bang on the money.”

The age profile of the Louth panel makes Reid, at just 29, look like an elder statesmen. However the Mattock man says the older members of the squad have been gripped by the infectiousness of youth.

“The enthusiasm they have shown has definitely rubbed off on the older lads. Last year there were times when we were wondering if things were just going to fizzle out but they’ve injected new life into it and the most encouraging thing is that they are learning game by game and taking things on board.”

Reid knows that all of the pre-season promise will mean nothing if Louth don’t make a winning start on Sunday. The Exiles may be ranked as 66/1 outsiders to win promotion but he stressed that this fixture should not be looked upon as a home banker.

“January 31 has been the target for us right from day one but we’re under no illusions about how tough London will be,” he said. “In the past people would have seen this game as a handy two points but it’s going to be a real battle.

“The pitch in Drogheda will be heavy and we’re going to have to work harder than them to get off to a winning start. That’s all that matters.”