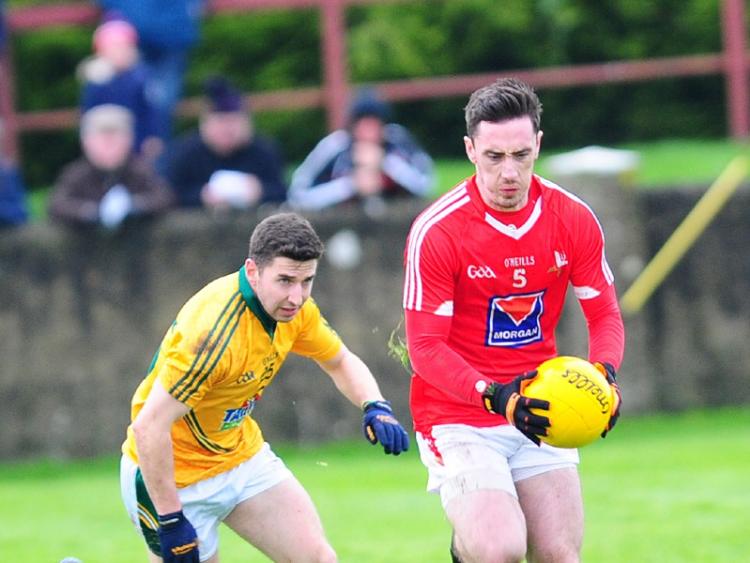 Derek Maguire said that the mood in the Louth dressing room was upbeat despite Sunday’s narrow defeat to Meath in Drogheda, WRITES GAVIN MCLAUGHLIN.

Louth missed out on a place in the O’Byrne Cup final after slipping to a one point loss against their neighbours but looking at the bigger picture, specifically the National Football League opener against London on Sunday week, Maguire feels that the Wee County are in good shape.

“It’s disappointing that we didn’t win it but we said at the start of the game that we wanted a good performance,” he told LMFM’s Sunday Sport.

“Everybody on the pitch did that. We made a few fundamental mistakes but this is the time of year to be making those. Everything is geared towards the London game now.”

Things looked bleak for Louth at half-time as they went into the dressing rooms on the wrong end of a four point deficit.

“Our backs were against the wall in the first-half and in the last 15 minutes we probably panicked at stages,” conceded Maguire.

“But the lads came in and gathered themselves and we came out a bit more relaxed in the second-half and anything that we were told to do, we did it. We can’t be too disappointed.”

Attention now turns to the visit of London on January 31 and Maguire feels that the O’Byrne Cup has been good preparation for the Division Four curtain raiser against the Exiles.

“We’re a Division Four team and we’re expected to beat college sides like DIT but playing against a team like Meath is a great test for us to see where we are. We’re happy. There are still a lot of improvements to be made.

“If we compare where we are to this time last year then we are definitely in a better position,” he added. “We are mentally better, we are fitter and much better prepared. There’s a great buzz around the place and everybody is looking forward to training and the start of the league.”