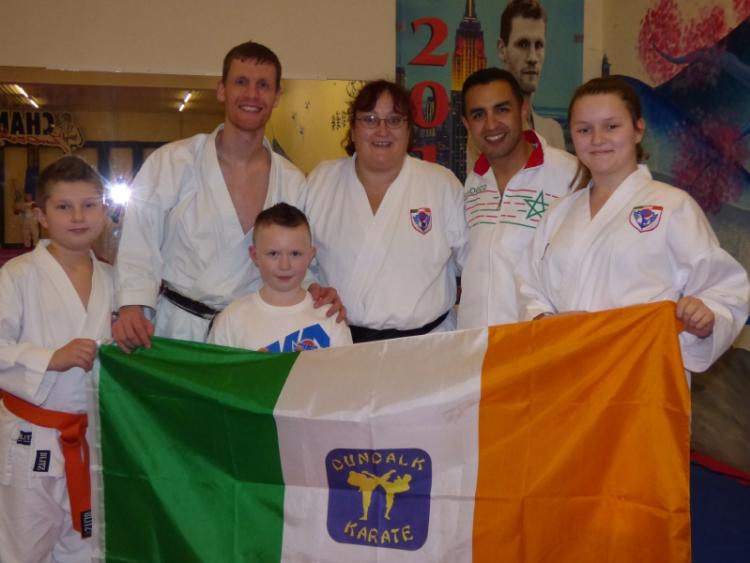 When most people think of Belgium they think of Brussels but Dundalk Karate think of Liege and CIKA Honbu Dojo.

Some people may associate Belgium with having over 1,000 beers, but Dundalk Karate associates Belgium with training in both Kata and Kumite with World and European Champions and training with fellow Karateka from numerous other CIKA member countries like Denmark, England, Wales, Belgium, Morocco etc.

After a good night’s rest in Liege, and a breakfast of champions with fellow CIKA Ireland members, everyone travelled the short distance to Sensei Lefevre’s Champions Dojo where everyone firstly congratulated Sensei Stephen Hughes, mentor and friend to all within Dundalk Karate, and chief instructor of INSK CIKA Clondalkin on earning the rank of Godan (5th Dan) under CIKA World Chief Instructor, Sensei Junior Lefevre.

This was followed in quick succession by everyone warming up and preparing themselves for what lay ahead over the next two days of intensive training.

With this being the first time Dundalk Karate travelling to Liege as part of CIKA Ireland, and the first time they were to train in the prestigious Champions Dojo, you would think that their nerves would kick in, but with everyone so welcoming and encouraging, Liam, Francislek, Catherine and Mary got stuck right in, and thrived under not only the tutelage of Sensei Lefevre, but also Driss El Mannani, the national trainer of FRMK Morocco and one of the many CIKA Instructors.

It wasn’t long before the onlooking parents relaxed in the knowledge that every time they saw their child take a quick break between sessions with smiles on their faces, and eager to get back to training with everyone else, that they to started to relax, and enjoy the atmosphere within the Champions Dojo.

Sensei Mary Marcus 2nd Dan and Head of Dundalk Karate said: “Dundalk Karate introduced a Junior Lefevre Sponsorship Program last year and to say that Catherine, Liam and Francislek made the most of this sponsorship, is an understatement. It’s just a joy to see.

“There were a number of different training sessions over the weekend, with either Sensei Lefevre or Sensei Driss El Mannani, each student could take part in all or opt out of if they wished to take a break, and to say that Catherine, Liam and Francislek participated in each one with relish is putting it mildly.

Students of Dundalk Karate continue to train weekly in the Redeemer Family Resource Centre every Monday and Thursday and with numerous events penciled into Dundalk Karate’s diary, 2016 is looking like its going to be very busy and an exciting time for all involved.

New members are always welcome and if you would like any further information on Dundalk Karate, why not contact Sensei Mary on 086 353 1625 or karatequeen@live.com