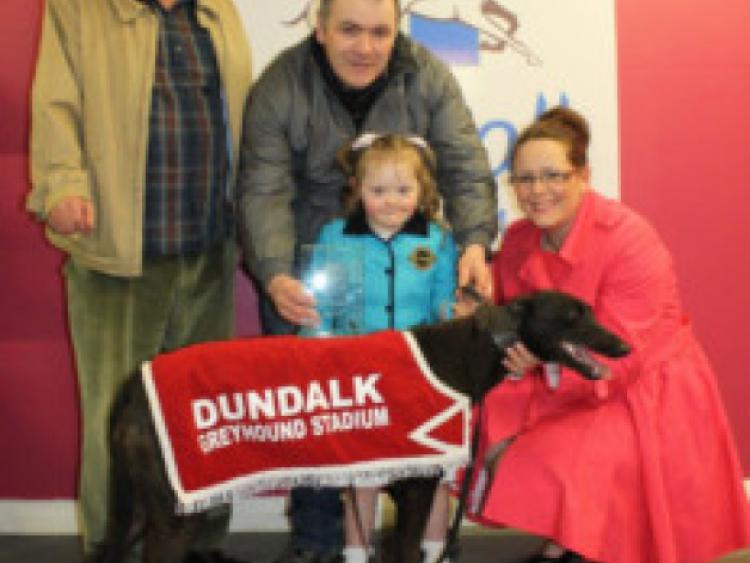 With the gallopers back in their stables for the time being, the season’s first stand-alone Friday night fixture at Dundalk Stadium was significant for the outstanding success enjoyed by a couple of Northern Ireland kennels.

With the gallopers back in their stables for the time being, the season’s first stand-alone Friday night fixture at Dundalk Stadium was significant for the outstanding success enjoyed by a couple of Northern Ireland kennels.

Jim Hynes, based in Crumlin, Co Antrim, is having a terrific run of late with his Quarterland runners, and he brought his score to 12 for the season with a treble. It was no ordinary treble. Each of his winners is the produce of the kennel’s prolific dam, Quarterland Hope, but have different sires.

Barney Mooney, who fights out of Bessbrook, Co Armagh, chipped in with a double – and what a double it was, litter-comrades, Complicated and Hes A Dream, recording superfast times.

First round heats of the Johnny McArdle Memorial 550 featured on the 11-race card, and it was one of these that brought up the Hynes treble. Quarterland Mary (May’11, by Droopys Scolari) went in after Quarterland Nico (November ‘12, by Hondo Black) and Quarterland Tune (January ‘12, by College Causeway) had scored in graded races. Three other kennel-mates of these filled places, two seconds and a third.

The Johnny McArdle Memorial is new to the calendar and carries a first prize of €1,100. In the opening heat, Quarterland Mary, drawn along the rails, was quickly into her stride, challenging recent scorer, Ni Dar, for the lead. Maggie Chips and Mark Street Lass then got involved, and there was never much between them.

Quarterland stayed on the better to win by just under a length from the Castleblayney-based Ni Dar, with the other pair, divided by a neck, also qualifying for the semi-final.

Unconsidered in the betting, Movilla Flyer made this his own race from the start in heat two, and was very good on the clock, his 30.27 the best of the three heats.

James Murray’s Newtownards dog went away fast from two, carving out an early lead from even-money chance, Wayiseeit, and Renaja Kitty. Wayiseeit was a constant treat, but Movilla Flyer was game up front, staying on to win by a couple of lengths. Sky Blues Boy and Renaja Kitty, the other semi-final qualifiers, were well adrift.

Showing a big improvement on recent Lifford runs, Brickhill Elsie made a successful return to the Dowdallshill circuit, her win in heat three coming after an absence since last August.

Martin Foley’s Ballymac Maeve bitch did it in style, building a lead which the favourite, Courtlough Megan couldn’t peg back. It finished with three lengths between them, the winner registering 30.35.

The other qualifying places went to Rocking Brae and Cheyenne Chief. The McArdle Memorial semi-finals take place on this Saturday night.

Mid-Louth owners were to the fore in graded races over the weekend. The Dromiskin-based Aintree Crew Syndicate won again with Aintree Smokey on Friday night, and 24-hours later, Paul McDonnell, from nearby Darver, was on the mark with his recent Kilkenny purchase, East London, Pennys Pearl had won for former GAA referee, Michael Hughes.

Quintessential seemed to have done enough to credit Lordship trainer, Peter Noone, with yet another winner, but the Lisburn-owned dog was caught right on the line. The outcome wasn’t all bad; Quintessential got a share of the spoils with Gatillos Sophie.