Jetson jets in with near record-run and Drumsna wins final 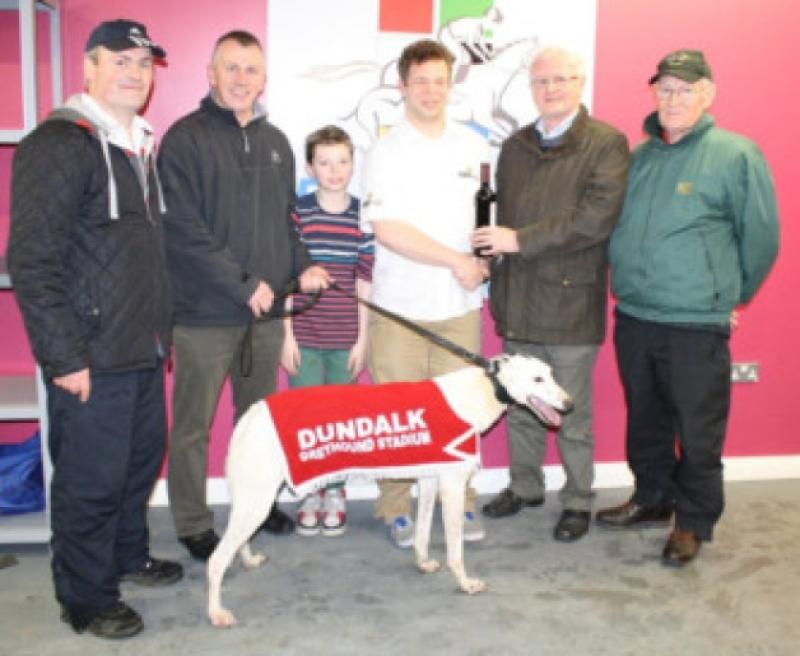 There were two highlights at Dundalk Stadium over the weekend – Drumsna Messi’s clear-cut win in the final of the Special Olympics 525 and Jetson’s near record run.

There were two highlights at Dundalk Stadium over the weekend – Drumsna Messi’s clear-cut win in the final of the Special Olympics 525 and Jetson’s near record run.

Drumsna Messi was caught close home in his semi-final, having at one stage enjoyed a considerable lead. But in the race that that mattered, the €900-to-the-winner decider, there was no claw-back of this consistent performer.

Trained by Martin Lanney from Trim, Co Meath, duo, Larry Costelloe and TD, Ray Butler, the son of Crash and Hather Rose got his customary fast start, and was clear turning into the back straight. He quickly opened up a five-length gap over Colm Farrelly’s Looks Fishy, with Extreme Heat at Gorey Misty close by.

Extreme Heat moved into second, but that was as good as it got for the fastest of the three semi-final winners. Drumsna Messi wasn’t for catching this time, and the now winner of 12 of his 40 races crossed the line just over three lengths clear of the Liam O’Rourke-trained runner-up in career-fastest 28.53.

Drumsna Messi, formerly owned by the now-Longford-based Pauline and Pat Quinn, is proving himself a real money spinner for his sporting owners. He won most races at Dowdallshill last season, and included a competition win among his successes.

Jetson went into the Friday night’s opening 525 with an impressive strike-rate, five wins from eight outings, and was well backed. It’s doubtful, however, if even his connections could have expected the former Clonmel runner to go to within four spots of the track record.

Leading from the outset, Jetson was quick to put a lot of distance between himself and the others, and maintaining a strong gallop got to the line four lengths clear of the odds-on Netherville Hawk.

Trained in Newry by Vincent Toner for local lady, Geraldine Lambe, Jetson’s time of 28.45 was just shy of the best-ever recorded by Ballymac Tipp four years ago, and though the track was rated .30 fast, it was still quite a run, easily the 2-year-old’s best for the distance.

On the same card, Fergus Run belied his years to score for local trainer, Peter Noone. Now approaching his fifth birthday, and with 97 runs to his credit, 20 of them having ended in victory, the son of Kinloch Brae is usually sharp at the break, and this was another outing in which he had them stretched from the start.

Keeping up a strong gallop, the Cooley Peninsula runner made it home with five lengths to spare, recording a useful 29.08.