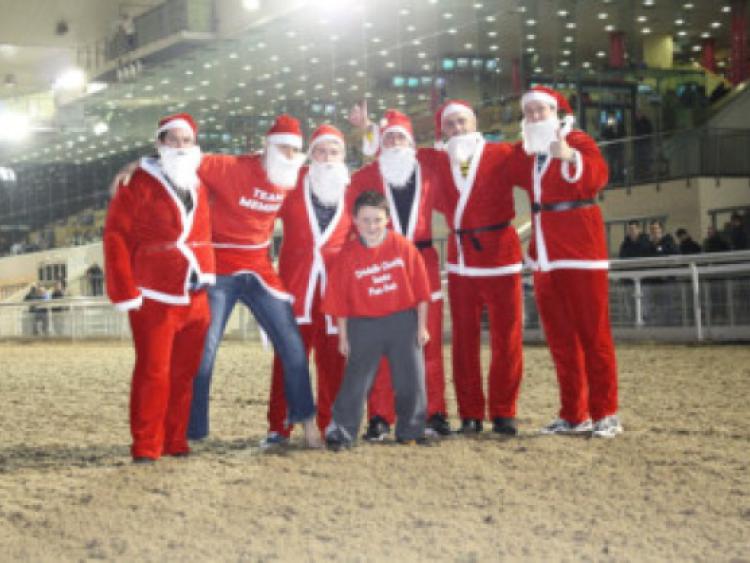 The magnificent sequence of wins run up by the Togher runner, Vedfield Bossman, came to an end at just the wrong time.

The magnificent sequence of wins run up by the Togher runner, Vedfield Bossman, came to an end at just the wrong time.

Michael Doyle’s runner was chasing a seventh consecutive win in Friday night’s final of the Barber Kennels Tri-Distance at Dundalk Stadium, but by dwelling in the traps, spoiled his chances.

The final was run over the 600, and as suggested here last week, the extended distance could suit outsider, Gorey Misty. Well it did, the Dungannon-based dog owned in partnership by Jim McRory and his brother, Art, the former Tyrone senior team manager, putting in a storming finish to just deny the Lisburn runner, Messan Motion.

Gorey Misty, a 4/1 chance, was winning for the first time, having previously run five races. While Vedfield Bossman’s run has come to an end, Gorey’s could be about to get one going.

There’s a big meeting coming up on Friday of next week, marking the stadium’s tenth birthday, and currently in progress are a number of sweepstakes, the finals of which are scheduled for November 29.

The preliminaries of the Droopys Stud 550, confined to bitches, also featured on Friday night’s card, and a heat-winner here was Tullna Amy for the Harry Lawrence/Pat Duffy axis. This experienced lassie flew from traps, and after building a good lead never looked like being caught.

Colm Farrelly’s Rock Me Mama took second behind Black Economy in another of the heats, and also goes through to this Saturday night’s semi-finals.

Art McRory wasn’t the only star from another sport to be linked with a winner over the weekend. Shane Grimes, on the beaten Drogheda United side in the recent FAI Cup final at The Aviva, has a few dogs in partnership with another local lad, Peter McArdle, and one of them, Airborne Hawk, was a well backed winner of a sprint.

Then on Saturday night, Mickey Cee Mayo, won a heat of the Catunda Kennels 550 for joint-owners, Danny Cawley and Michael Conroy, who came on a as a sub for Mayo in the All-Ireland final.

Another heat-winner in this competition was Bit Of Berlin, running for Haggardstown’s Senator Jim D’Arcy and Stephen Thornton. By coincidence, one of the Kinloch Brae dog’s victims was Heaslip, owned by a Fine Gael colleague of Senator D’Arcy’s, Ray Butler, TD.

The Gourmet Island 525 is developing into a tidy contest. Mounthill Hawk was fastest of the second round winners, but going as good as anything else is Valeries Courage, trained on the Cooley Peninsula by Peter Noone. This lad’s heat win, in 28.88, was his second in succession, and he must stand an outstanding chance of emerging from this weekend’s semi-finals.

Among the heat-winners in the Impact Bathrooms Tri-Distance competition was Sarasota Sally, owned by trainer, Seamus Casey, and Dowdallshill’s Arthur Boyle. The Ballymac Meave bitch came home two lengths in front of another of Harry Lawrence and Pat Duffy’s, Beanfield Beauty.

Paul McDonnell’s Darver King looked certain to collect when he led the field down the back in another of the semi-finals, but he was caught right on the line, beaten by the minimum distance.