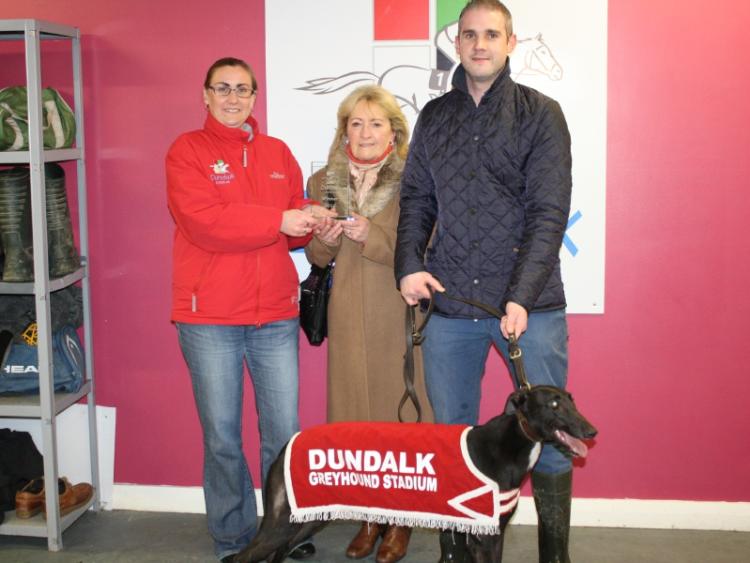 Shelone Gem got the widely-anticipated win in last Friday night’s final of the Slipalong Hero 525 at Dundalk Stadium, scoring with considerable ease.

Running from the coveted inside berth and defending an unbeaten record in the €1,000 competition, the Co Meath runner, owned by the two Patricks, Sheehy and Malone, took up the running at an early stage, and was being cheered home a winner long before turning for home.

The odds-on chance galloped all the way to the line, finishing almost eight lengths ahead of Brandy Tonic in 29.09. The Lordship runner, Across The Way, denied a clear run early on, came in fourth.

Doyles Fort Grove owner, Hugh Markey, shared in a tidy double on Saturday night’s all-graded card. Maytown Eclipse, which he owns in partnership with Newry’s Conor Slevin, pulverised the opposition in a 525, returning an excellent 28.67 on a track estimated .20 fast.

Winner of the pre-Christmas Eamon McCrave Memorial 525 in 29.13, the choicely-bred son of Kinloch Brae and Razldazl Lily was soon clear, and opening up impressively in the back straight put a lot of daylight between himself and the others. A dozen lengths divided the odds-on chance and Blenhiem True at the line.

Markey and his long-time colleague, Peadar Woods, would have derived considerable satisfaction from Maytown Rules’ win in the concluding 525, bringing up the double. The July 12 bitch is by Maytown Ruler and Share Recovery, both of whom represented Woods’ Newry kennel in their racing days.

A winner of eleven of her 36 races, Maytown Rules scored in contrasting style to her kennelmate, coming late to snatch victory from Beretta Blue, who looked certain to score for Clogherhead trainer, Michael Kelly, turning in.

Dunleer’s Kevin Kearney got among the winners with his November purchase at the Thurles Sales, Leonas Babe. Having her third race since arriving in these parts, the June ’14 whelping pulled away from the others in the home straight to win over the 360 by three lengths in 19.28.

Though nearing his fifth birthday, Hip Hop Harry retains his zest for the game, as illustrated by his win over the standard distance. Laurence and Brian Jones’ homebred was on to a 16th career win when forging clear in the back straight, and he had enough in hand to hold the late run of the Donegal runner, Walk With Swords.