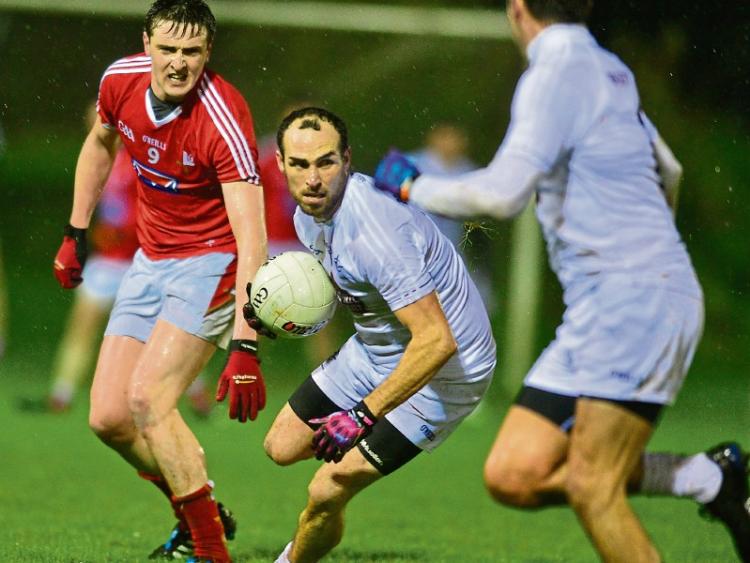 Louth supporters who braved the atrocious weather conditions to make the journey to Kildare’s Centre of Excellence in Hawkfield last Wednesday night would have made the trip home with a warm glow as the Wee County, led by the influential James Califf, ran out comfortable nine point winners.

On a night that could only be described as horrendous, with strong winds and incessant sheets of rain falling from start to finish, Louth fully deserved their victory with Califf contributing nine of the Reds’ 13 scores.

The Dreadnots man seemed to thrive in the conditions. An expert free taker with his left peg, he compiled a personal tally of 1-8, which in itself was enough to win the game but his overall display was very encouraging and no doubt very welcomed by the Louth management.

Kildare could have had a goal inside the opening 30 seconds when Rob Kelly set up Eddie Heavey in front of goal but the Moorefield man failed to hold on to the ball and the chance disappeared.

It was probably the nearest in the entire 70 minutes that Kildare came to finding the net as Louth opened the scoring through Califf and while Mikey Conway levelled after eight it was that man Califf who filled the Kildare net a minute later having been set up by Declan Byrne.

Califf converted a ’45 to stretch the lead and while Ray Cahill converted a free for the home side it was plain to be seen that Louth were more tuned in as even their short kick-outs found their targets with consummate ease as the home side failed to come to terms with the sweeper system Louth employed from the off.

A Ronan Holcroft free and another Califf point stretched the lead before a high ball into the Kildare danger area was gathered by Barry Flanagan, who, despite having two defenders around him, made space before firing to Colin Heeney’s net.

Daryl Flynn picked up a silly black card before Eamonn Callaghan pointed but there was little respite for Kildare as the visitors led by 2-5 to 0-5 at the break.

However it remained all one way traffic with three more points for the visitors arriving from Califf (2) and substitute Jim McEneaney before Kildare finally pointed in the second-half through Cathal McNally on the hour.

Eoin Powderly (Kildare) and Pádraig Rath (Louth) picked up red cards as they rolled around the wet surface but all things considered it was a harsh decision by referee Seamus Mulhare.

Califf fittingly got his side’s last point with Kildare adding two from McNally and Cahill and Reds boss colin Kelly will take heart from what was arguably the best performance of his tenure to date.