'One of the world's great Arctic Explorers' 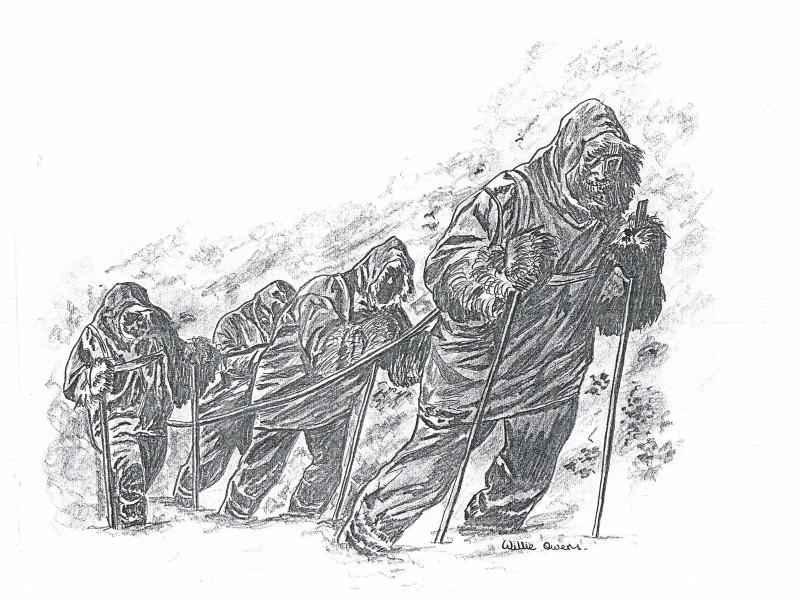 A solitary figure trudged through the pristine snow towards the makeshift hut, with an inevitable sense of foreboding.

Stopping only for a moment, he then flung open the tattered door and stood as the last vestige of an unholy odour escaped past him out into the relentless Arctic wind. Mc Clintock knew he had no right to expect otherwise at this point, as he solemnly surveyed the skeletal figures within. For the ‘Siren-like’ lure of the Arctic had enticed and deceived many men, for beneath the virginal beauty of this enchanting land, slumbered mother-nature at her very cruellest.

Born in Seatown, Dundalk, on July 8th 1819, Francis Leopold Mc Clintock appeared focused on his calling from a very early age, leaving for Portsmouth at the tender age of twelve to enlist as a Cadet on a 25 - gun frigate, the ‘Samarang’. McClintock went on to spend three years on this vessel, quickly becoming a firm favourite with the crew, who affectionately named him ‘Wee Paddy’. McClintock finally left the ‘Samarang’ to serve on various other vessels, and after a year on the ‘Hercules’, returned to his mother’s new house in Dublin, his father, a former Head Official at Dundalk Custom’s House, having died while Francis was still at sea.

After some months at home waiting for a ship, McClintock was appointed second Lieutenant on the ‘Enterprise’ of Sir John Ross’s expedition, which was to set out in search of the missing Franklin expedition.

Although the search itself ended in failure, it nonetheless provided McClintock with invaluable experience on the rigours and methods of Arctic travel, experience which would in time, stand him in very good stead. In 1850 the British Admiralty sent out a fleet of rescue ships to search for the forlorn Franklin; McClintock at this stage, having earned promotion to first Lieutenant on the barge ‘Assistance’.

Reaching Lancaster Sound, McClintock sent out fifteen sledges to cover a vast area, he himself setting a record unequalled in history, by covering 1,400 sea miles in 104 days. It was an extraordinary feat of endurance, but alas there was still no sign of Franklin’s vanished expedition.

Shortly after returning home, disregarding the previous lack of success, the intrepid Mc Clintock sailed once more to the Arctic. Passing through Lancaster Sound to reach Melville Island on May 14th 1853, he crossed the strait to a new and unknown island, which he named Prince Patrick Island. Pressing on still further, several days later he encountered another uncharted Isle, which he named in honour of his native land, ‘Emerald Isle’. In all, McClintock covered another 1,030 miles through pack ice and snow drifts in his perilous search for Franklin. Despondent at his failure, he returned to England and then to Ireland. In Dublin he was received like a true hero and was greatly praised for his heroic efforts, receiving honour after honour, while he himself gave vivid lectures on the rigors of Arctic life to the Royal Dublin Society.

McClintock was far from satisfied that everything possible had been done to locate the Franklin expedition, whatever its condition. So when Lady Franklin fitted out a steam yacht at her own expense to determine the fate of her lost husband, it seemed only fitting that the command e should fall to the tenacious McClintock.

On July 1st the ‘Fox’ set sail for King William Island, where the capricious hostility of the Arctic climate kept the expedition in pack ice for almost a year. Eventually two sledges, one under McClintock’s command and the other under Lieutenant Hobson’s, left on their mercy mission. Several days later in April 1859, Hobson located Franklin’s written record of their sorry fate, while McClintock had the dubious honour of finding Franklin’s abandoned boats and several skeletons on the west coast of King William Island, thus poignantly completing his eleven year quest.

McClintock returned to England and a hero’s welcome. A knighthood was conferred on him by Queen Victoria. Later he received the freedom of Derry, and in Dublin he was given an honorary degree at Dublin University.

In 1860 McClintock, now a rear-Admiral was back at sea in command of a survey ship, ‘The Bulldog’. Later he became Admiral Super-Intendant of Portsmouth Dockyard, transferring then to a West Indian station where he retired in 1884, receiving his final ‘orders’ in 1907 when he died at the age of eighty eight .

Mc Clintock maintained throughout his adventurous life that indomitable code of all great explorers, ‘To strive, to seek, to find and not to yield’. (Tennyson’s – ‘Ulysses’).