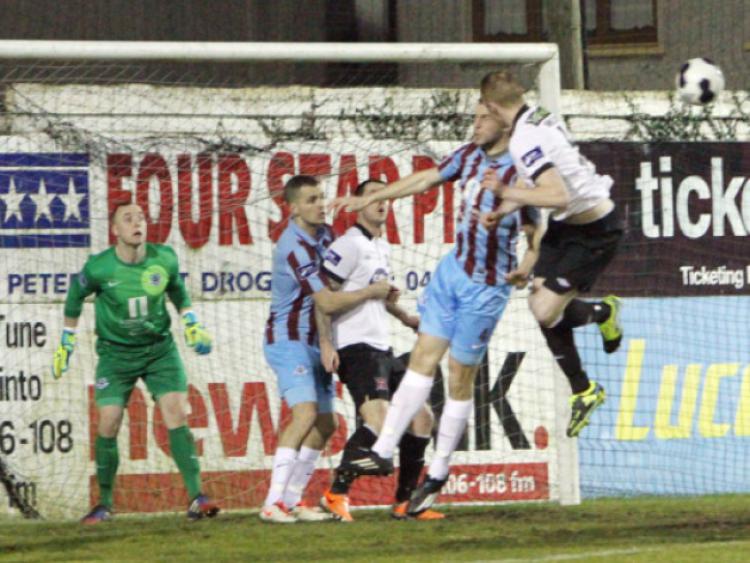 A stunning free-kick from Eric Foley gave the Drogs the upper hand going into the half-time break. Perth admitted there was little Dundalk could do to prevent that goal but it was the manner in which they conceded three more after the break that left him concerned.

“It was a bad night all round. They scored a wonder goal from the free-kick and it kicked off from there. In the second-half we didn’t defend set-pieces properly and that’s just not acceptable. We have to correct that.

“That’s not us,” he added. “Last year we only conceded one goal from a corner, in the second last game of the season. We do a lot of work on it and on all that stuff, the boxes are ticked. It is something that has to be fixed and it will be fixed. We’ll learn from it and sort out the problems we have.”

There may be concerns hanging over Dundalk’s back four, but Perth feels there is nothing wrong with their attacking play and on another night, the Lilywhites could have been out of sight before Foley’s opening goal.

“For 35 minutes it was as good a performance as I’ve seen since we came back this year. We just lacked the goals that would have been our reward for that.

“We dominated the opening 35 minutes and had the chances. Kurtis Byrne’s and Daryl Horgan’s were the obvious ones but Chris Shields had a chance from a corner that he might have got his head on and scored. You mightn’t have seen it from where you were in the press box but it was a really good opportunity.”

Drogheda United finished the game with ten men after Gavin Brennan was shown a straight red card by referee Derek Tomney late on. However, Perth felt the home side should have had a player dismissed long before that.

“There was a definite red card earlier in the game when Patrick Hoban was taken down on his way to goal by Paul Andrews,” he said.

“It doesn’t make sense because the ref didn’t do anything about it. There was no need for Pat to go down, he was one on one with the keeper. He was taken down and it should have been a red card.

“United Park has been a bit of a bogey ground for us,” he concluded. “Different decisions have gone against us but, look, the referee didn’t cost us the game tonight, we did that ourselves.”