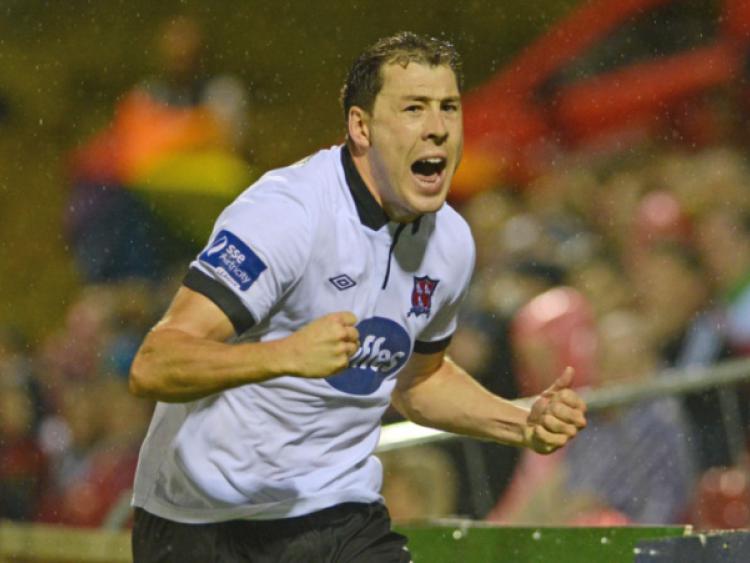 Dundalk showcased their limitless reserves of character yet again at a rain drenched Turner’s Cross last Friday to move six points clear of Cork City going into the final series of games.

Dundalk showcased their limitless reserves of character yet again at a rain drenched Turner’s Cross last Friday to move six points clear of Cork City going into the final series of games.

An intimidating atmosphere welcomed Stephen Kenny’s league leaders on the banks of the Lee with 5,650 packing into the ground to watch the two best sides in the country do battle.

Cork City boss John Caulfield made a number of additions to his squad before the transfer window closed on Thursday and two of those new faces made their debut with Ross Gaynor and Josh O’Shea both named in the starting XI..

A sizeable and vocal contingent made the long trip south and they contributed to the electric atmosphere that seemed to whip the Cork City players, in particular, into a frenzy.

John Caulfield’s side were caught up in the emotion of the occasion too much, conceding an alarming early number of fouls by trying to stifle Dundalk with a crude, physical game.

The Lilywhites made just one change from their 5-1 win over Bray Wanderers the previous week with Chris Shields - who would go on to be named man of the match - replacing Ruaidhri Higgins and they showed the kind of composure and experience that they were perhaps lacking in fixtures like this last season.

By the time the yellow card count had hit six by the midway point of the half, four of those being for some crude challenges by the Rebels, Dundalk had already silenced the early roars of the home faithful.

Richie Towell went close with a free-kick from 30-yards on 12 minutes that Mark McNulty got down smartly to save but three minutes later, the long-serving goalkeeper was retrieving the ball from the back of his next after the midfielder beat him.

A mesmerising turn of pace from Daryl Horgan saw him leave John Dunleavy in the distance and when the ball ricocheted kindly into the path of Towell, he casually curled the ball into the corner to score for the 13th time this year.

Kenny’s game plan had reaped dividends early and his side were unlucky not to add to their tally before public enemy number one in Cork, referee Padraigh Sutton, had blown the half time whistle.

With Cork offering little threat bar a Colin Healy drive from range that was always rising, Dundalk continued creating chances. Lovely link up play between Daryl Horgan and Patrick Hoban ended with the former firing a deflected effort at goal that was saved.

Darren Meenan then fizzed one over the top before Kurtis Byrne set up Towell on the stroke of half-time. His connection was sweet but the volley whistled off target by mere inches.

Caulfield’s men upped the tempo after the break and had a little more joy in their pursuit of an equaliser as they aimed to show why teams have struggled to win at Turner’s Cross this season.

They last lost a game in a national competition when Shamrock Rovers left with the points in the league last June while they had never conceded more than one at home all season. Which makes this win for Dundalk all the more impressive, although they did have to do it the hard way.

Dane Massey made a timely block to snuff out Josh O’Shea with Peter Cherrie stranded but the goalkeeper was in the right place to save a Garry Buckley header from Billy Dennehy’s cross soon after.

Winger Dennehy would be the architect of the leveller when it arrived with seven minutes left. His free kick from out on the right spun towards the back post where his brother Darren was on hand to nod home.

Their joy was extremely short-lived as Dundalk again displayed their powers of recovery and their hunger to end 19 barren years without a league title.

From the kick off, they won a free kick of their own out wide which Towell sent on to the head of Patrick Hoban. His flick caused chaos in the box but Brian Gartland possessed the calmest head of all to poke the ball to the net.

Cherrie gathered a Billy Dennehy free-kick and Andy Boyle survived a late penalty scare in the dying minutes but Dundalk held on and Gartland’s goal could be worth its weight in gold by the time the medals are handed out come the season’s end.