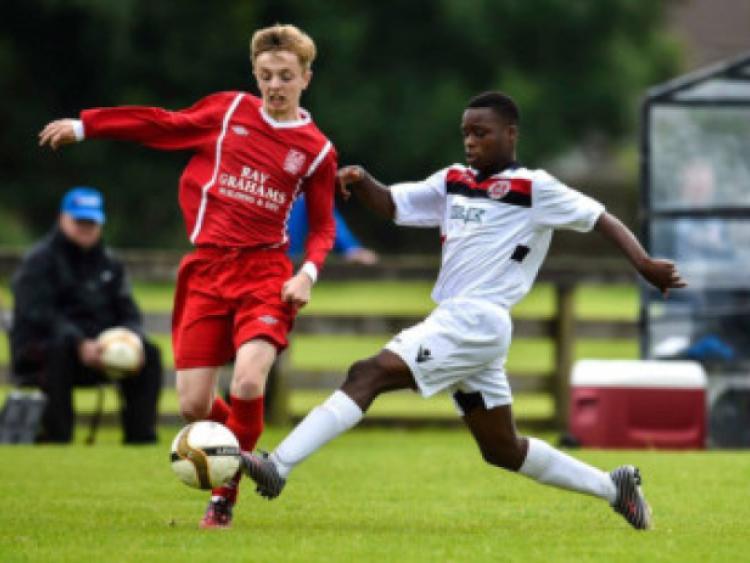 Dundalk Schoolboys League had a mixed week at the Dale Farm Milk Cup in Coleraine, winning two games and losing three on their way to a third placed finish in the Salver Cup section of the tournament.

Dundalk Schoolboys League had a mixed week at the Dale Farm Milk Cup in Coleraine, winning two games and losing three on their way to a third placed finish in the Salver Cup section of the tournament.

Next up for the Dundalk lads was a game with Co Down at Rugby Avenue the following day.

Glenmuir United’s Dean Connolly powered a thumping header past the Co Down goalkeeper after some neat play down the left to give Dundalk an early lead.

Dundalk almost added to their tally, going close a couple more times but the Co Down goalkeeper succeeded in keeping the score at 1-0 as both sides went in for half time.

Leo Brown made no mistake, driving home from the edge of the box to give Co Down an equaliser.

It looked like the game would finish in a draw but the Dundalk team was left stunned when Co Down scored a winner in the dying seconds.

English Championship side Watford were the opposition in Dundalk’s final group game on Wednesday, July 30 at Roe Mill.

Azeez Ogunfowora of Glenmuir United scored for Fran Donnelly’s side but Dion Pereira’s double before half-time was enough to earn the young Golden Boys a win, sending Dundalk into the Salver Cup section.

A place against Everton in the final of Salver Cup was up for grabs when Dundalk faced Swindon Town at Castle Rock last Thursday.

The English side got off to a great start when Jack Stanley scored with a delicate flick.

Dundalk responded well and piled on the pressure from set pieces and they were unfortunate not to equalize after a shot came back off the post.

Swindon landed a sucker punch in the second-half through Jayden Mitchell and when goalkeeper Declan Lehmann made an amazing save to deny Dundalk striker Connolly a goal, the writing was on the wall for the Dundalk lads.

Sol Pryce wrapped up a 3-0 win for Swindon late on.

The week ended on a high for Dundalk as they beat North Dublin Schoolboys League 2-1 at the Riada Stadium on Friday, ensuring a third place finish in the Salver Cup section.