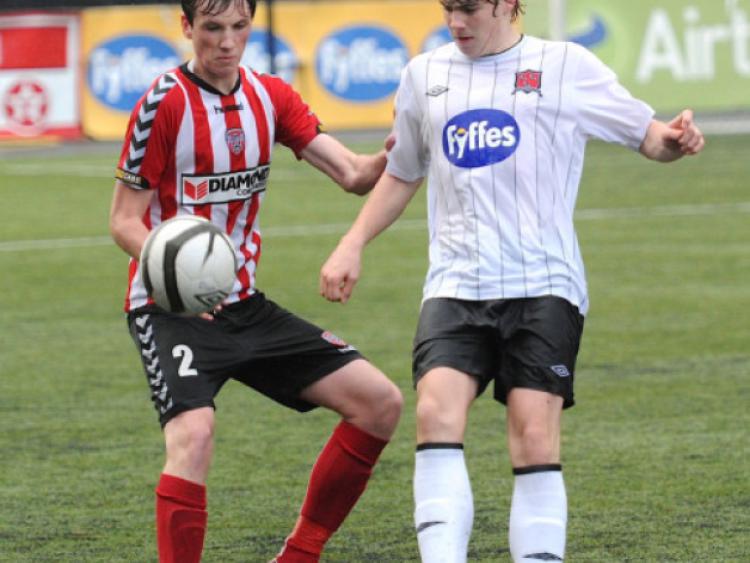 Dundalk U19s travel to the Maiden City to face Derry City this Saturday (January 11) knowing that a point against the Candystripes would secure their place in the Airtricity U19 Elite League qualification group.

Dundalk U19s travel to the Maiden City to face Derry City this Saturday (January 11) knowing that a point against the Candystripes would secure their place in the Airtricity U19 Elite League qualification group.

Martin Connolly’s side went into the Christmas break sitting two points ahead of Derry at the top of the table following a comprehensive 3-0 win over Letterkenny Rovers at Oriel Park.

The top two in the Northern Division will go forward to a five team qualification group, consisting of the top two teams in the Southern Division and the best placed third side from the two categories to fight it out for a place in the Elite Division.

And with just three games remaining, the young Lilywhites are well placed to achieve their objective.

“Obviously we are very confident of qualifying for the promotion group”, said Connolly.

“The great thing about that is that we will have an extra 12 games. This time last year our season was coming to an end but this time we’ll be playing games which will run alongside the first-team season which will only help the likes of Ciaran O’Connor and Conor McDonald who have been on the fringes of Stephen Kenny’s side.”

Connolly’s side have been active since that victory over Letterkenny on November 30.

On December 30 the young Lilywhites beat the Republic of Ireland U17 team 3-1 at the AUL Complex in Dublin with goals from Caolan Dillon, Georgie Poyton and Dylan O’Hanlon giving Dundalk the win.

Dillon’s goal was an outstanding effort, the youngster beating the Irish goalkeeper with an effort from the centre circle at the beginning of the second-half, and Connolly said he was one that could feature in the first-team when pre-season resumes on January 12.

“I know that Stephen (Kenny) has been watching Caolan”, he remarked. “His goal against Ireland was fantastic.”

Another friendly in Dublin, against AUL side Baldoyle on Saturday last, ended in a 5-0 victory for the Lilywhites and they will go to the Brandywell in confident form.

“We only stopped for a week over Christmas, so we are ready to go”, stated Connolly.

“We played very well against Baldoyle and in the second-half against the Irish U17s we were excellent and fully deserved our win.

Conor McDonald will miss the trip north with a knock but Connolly has been delighted with players who have come in during the Christmas break and staked a claim for a regular place.

“We have signed a young lad from Cavan called Cormac Boyle who was very impressive in the two friendly games and Anton Reilly, who is still only 16, has been with us and done quite well.

“We are hitting a very nice run of form at the minute so hopefully we can keep that going.”