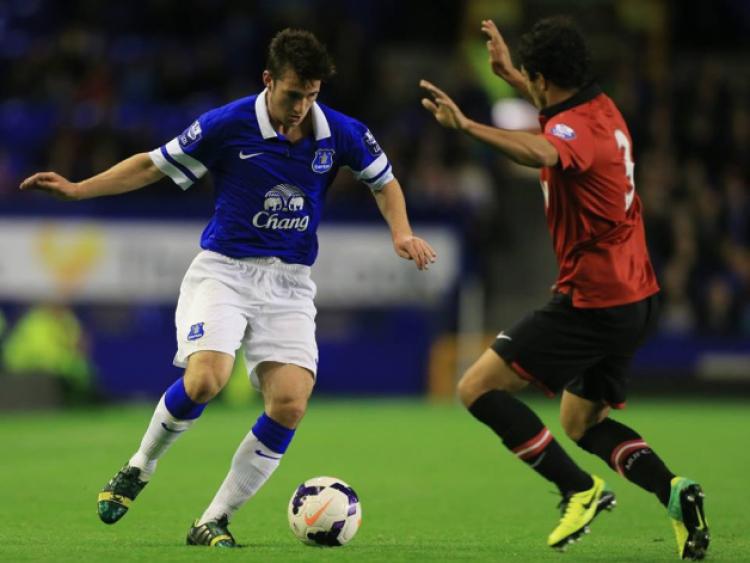 After a year of getting to grips with his new surroundings, Ben McLaughlin is hoping that 2014 will see him cement a regular place in Everton’s U21 side and, hopefully, attract the attention of Toffees first-team manager Roberto Martinez.

After a year of getting to grips with his new surroundings, Ben McLaughlin is hoping that 2014 will see him cement a regular place in Everton’s U21 side and, hopefully, attract the attention of Toffees first-team manager Roberto Martinez.

The former Dundalk full-back signed for Everton in August 2012 and 16 months into a three-year contract he now feels he is starting to establish himself in the underage ranks at Goodison Park.

McLaughlin returned to Merseyside after spending six days at home over the Christmas and New Year period and, speaking to the Dundalk Democrat on Sunday, he said he was fully recharged and ready to go.

“Whenever I came home in the past I always felt a bit sad about going back over to Liverpool”, he said. “That’s not the case now. I’m fully settled in, I’m living in the same house as when I came over and I’m driving aswell. The city is only 10 minutes one way and the training ground is 10 minutes the other way so it’s great.”

By his own admission, Ben’s first season was a learning curve and he didn’t feature as much as he would have liked with the club’s U18 side.

This season, however, he has made steady progress after being promoted to Alan Stubbs’ U21 squad, playing four times and named as a substitute on a further 10 occasions.

Stubbs is assisted by another former Evertonian, David Unsworth, and McLaughlin is delighted to be picking up tips from two tough tackling ex-defenders.

“For me, it’s great to have them in charge. They tell you what you’re doing right and if you’re doing something wrong, they’ll definitely get stuck into you which is what you want at my age.

“The tempo is a lot faster at U21 level than at U18”, he added. “At U18 it is more about learning things and if you make a mistake it is forgotten about. You are still learning in the U21s but the pressure is on you to perform.”

Ben’s last appearance came in the 2-1 loss to Fulham on December 3, a game which saw the young Blues lose a six-game unbeaten run.

However the highlight of this campaign was his appearance in the 0-0 draw with Manchester United in front of 6,000 people at Goodison Park in late October.

The Red Devils named Brazilian duo Anderson and Fabio Da Silva in their starting XI and McLaughlin came face to face with the United full-back on a number of occasions.

“That was a mad experience”, he laughed. “Fabio never stopped running and I couldn’t take my eye off him. It was a fantastic experience though, not just for me, but for the rest of the lads in the team.

“It was my first time playing at Goodison and it definitely gives you the hunger to want to go back and play there for the first team.”

McLaughlin started at right-back against United with veteran full-back Tony Hibbert playing on the opposite side for the Blues.

Hibbert has made over 250 appearances for the club and with Seamus Coleman and Leighton Baines also at Everton, McLaughlin feels he is learning from some of the best full-backs in the business.

“Tony is one of the best defensive full-backs in England and you learn so much just from being around him”, said Ben. “Then you have the likes of Seamus and Leighton Baines who are the best attacking full-backs there is.

“Watching Coleman is great for me”, he added. “He has come from the League of Ireland and he is the perfect example, for me, of what can be done. He is flying at the minute and I don’t think there is a better right-back in Europe at this moment in time.”

As well as Coleman, Everton are flying. The transitional period that many expected when Martinez arrived to take over from David Moyes has failed to materialise and the Toffees have enjoyed a fantastic start to the season.

“There is a great buzz about the place”, agreed McLaughlin. “Roberto likes to get the ball down and play and he likes his full-backs attacking. He is a manager whose style of play I definitely love. The U21s train at a different time than the first-team but he comes to some of the games and hopefully I might catch his eye.”

The 18-year-old continues to monitor events at Oriel Park, and this year he will also be keeping a look out for Louth’s progress following the inclusion of his brother Keith in Aidan O’Rourke’s Wee County panel.

“I was talking to him over Christmas and he said it was tough going but he is loving it”, said Ben. “Fair play to him, he has really stepped up his game.

“As for Dundalk, it’s great to see what’s happening there. I saw them play a few times last year and it was some difference from when I left. It’s crazy that they went from almost being relegated to winning the title.”