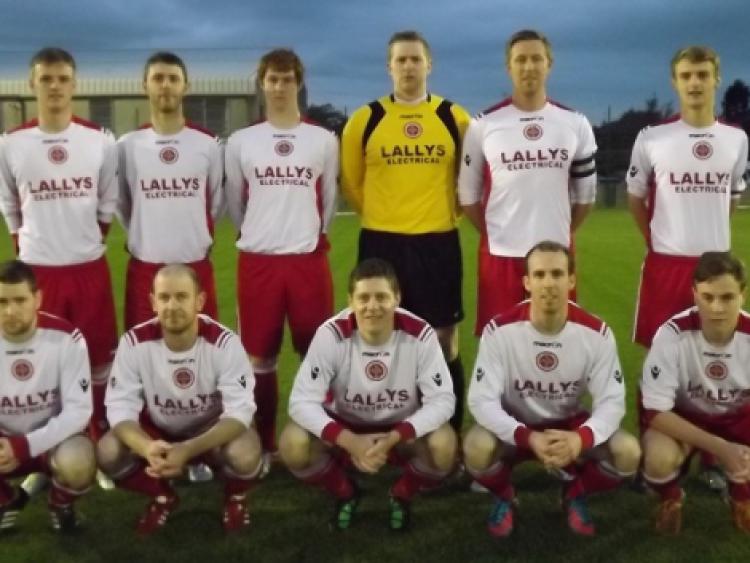 Rock Celtic’s Leinster Senior Cup 2nd Round game against Shamrock Rovers from Wexford came to a premature halt after 79 minutes at Sandy Lane on the evening of Friday 13th as floodlight failure caused the match to be abandoned with the score level at 2-2.

Rock Celtic’s Leinster Senior Cup 2nd Round game against Shamrock Rovers from Wexford came to a premature halt after 79 minutes at Sandy Lane on the evening of Friday 13th as floodlight failure caused the match to be abandoned with the score level at 2-2.

The Seasiders got off to a perfect start when David Ward latched on to a perfect weighted pass from Kevin McArdle to open the scoring after just 79 seconds of play.

Shane Reddish’s side side were well on top and Ward should have increased the lead when he broke clear on Rovers keeper Lee Murphy from a Derek Delany through ball but the striker took too much time on the ball and Rovers defender Gareth Larkin got back to make the block on the Line.

On the half hour mark the visitors drew level when Paddy Quinn’s poor defensive header fell kindly for the Chris Kenny and the centre-forward struck a sweet volley to the roof of the John Rogers’s net.

Rock thought they had restored their lead on 36 minutes when Ger McSorley’s low ball across the six-yard box was poked home by Ward but the referee’s assistant adjudged the striker to have been offside, much to the dismay of the home crowd.

The home side did regain their advantage ten minutes into the second half. Ger McSorley showed great tenacity to win the ball off his marker before he curled a beauty over the goalkeeper’s head from 25-yards to make it 2-1.

The boys from Wexford played an excellent brand of football and they drew level on 65 minutes.

Jamie Fox’s persistence led to Paddy Quinn losing possession and the Rovers player ran through on goal and unselfishly pulled the ball back for Chris Kenny who made no mistake from the six yard line.

Both teams settled down to chase the winner with each having opportunities but with the game evenly balanced and entering its final stages, the lights went out leaving the Seasiders with the prospect of a journey south for a refixture.