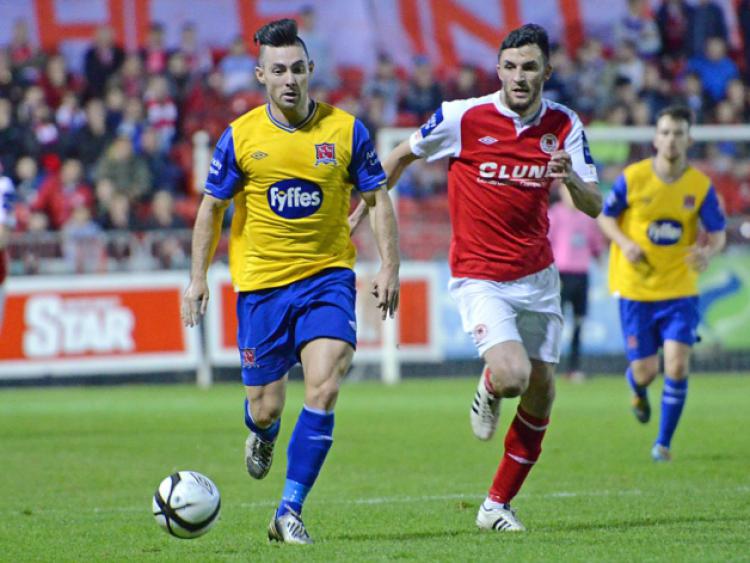 There was a notable incident as the game crept towards the full time whistle at Richmond Park on Friday night.

There was a notable incident as the game crept towards the full time whistle at Richmond Park on Friday night.

With St Patrick’s Athletic holding a two goal lead and just minutes away from taking control of the Airtricity League title race, you would have expected their supporters to be making all the noise.

But the crescendo was coming from the right of the main stand, where some 1,300 Dundalk supporters were packed in behind Peter Cherrie’s goal which was breached on two occasions.

A couple of St Pat’s fans in front of the press box laughed when they heard the sentiment but the volume increased and another flare was lit.

Down, but certainly not out.

Believe was the term being used by Dundalk fans in the build up to the clash in Inchicore.

A new banner, unveiled in honour of the late Marty Shields, was emblazoned with the word and even after Friday’s disappointing effort, the Lilywhite army still have faith in Stephen Kenny’s side.

From listening to the players and manager afterwards, they also feel they are still in the driving seat even if the table - which leave’s the Saints three points ahead of Dundalk with five games to play - suggests otherwise.

Speaking to Brian Gartland, I made reference to the night in Belfield on August 30 when Dundalk went top of the table. Not one player batted an eyelid when they heard the news that they had moved to the summit.

Likewise, they didn’t seem too despondent as they left the Richmond Park dressing rooms following a first defeat in 11 games.

“We’re disappointed in there but it’s certainly not the end of the league”, said the former Portadown man who was experiencing a loss for the maiden time in a Dundalk shirt.

“I remember reading Jim Stynes’s book, one of the best Irish sporting personalities ever, and he said the difference between good sports people and great sports people is how they react to adversity. If we are to win the league we will have to bounce back”, he added.

Friday’s game was surrounded by plenty of hype and the occasion certainly matched the build-up.

3,300 fans packed the Inchicore venue and even though almost half of those were supporting the visitors, it certainly looked like the atmosphere and the sense of occasion got to some of the Dundalk players.

Gartland conceded that it may have been a factor in Dundalk’s ‘below par’ performance but he warned his team-mates that it is something that will not be tolerated again.

“It might have been new to some of the lads but they’ve experienced it now”, he growled. “Now they have to roll up their sleeves and get back on it.

“You might only get one chance of winning the league and the cup”, he added.

“No run in is going to be smooth but we were below par all over the park. It was a big game, we needed to step up and we didn’t.”

“Now we need to win our two games against Limerick and Derry”, he continued.

“We can go back level on points with Pat’s if we win them both, or even go ahead of them, and it puts pressure back on them but that means nothing if we don’t win our own games.”