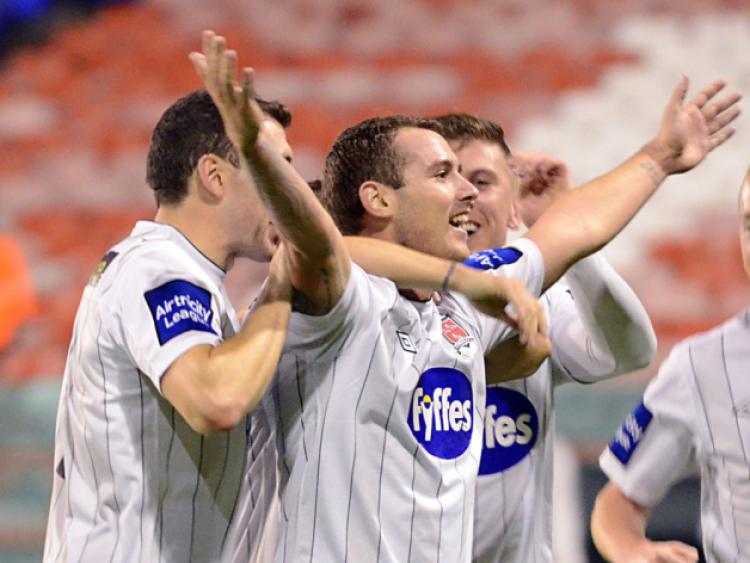 John Dillon says that Dundalk are looking to continue their magnificent run of form against St Pat’s in their table-topping clash on Friday night but he has stressed that the title will not be won or lost for either team at Richmond Park.

John Dillon says that Dundalk are looking to continue their magnificent run of form against St Pat’s in their table-topping clash on Friday night but he has stressed that the title will not be won or lost for either team at Richmond Park.

“There will be lots of twists and turns to come and regardless of what the result is, it will not be a winner takes all game”, said Dillon.

“The same thing happened with us last year at Sligo, strange things can happen.

“You get involved in weird games and things will change. We just have to concentrate on what we have been doing and hopefully that will be enough,” said the versatile midfielder.

“I think you would be lying if you said having beaten them twice already isn’t a positive but that goes out the window now and we just have to believe in ourselves.

“The team talk after the game, no matter what the result is, will be that there are still five games left that we have to give everything in.”

The former Crewe Alexandra player tasted league success with the Bit O’Red last season and he feels the the bond that existed between the Sligo players is very similar to the one that exists at Oriel Park now.

“The lads that are here this year are very similar to the lads we had last year. They really are,” he continued. “There is a real togetherness and, it sounds like an old cliché, but it is so true, we are not just 11 lads playing.

“We are 18 players, a squad who go into games and everyone gives everyone else their backing to do well.

“Everybody knows their roles which is important as formations change to suit players but I think the togetherness is the main thing that is the same as last year and obviously it was enough then so hopefully it can be again this time.”

The 25-year-old has also looked ahead to the run-in and believes the league anticipated a struggling Dundalk team at this stage.

“I looked at the fixtures and I think the way the league looked at it was to put us against the so-called lesser teams.

“They were probably expecting Dundalk to struggle at this stage and although on paper it looks like we have an easier run in, that means nothing because at this stage of the season you are playing teams scrapping for every point to beat survival or get into Europe.

“We just have to rely on ourselves to do the job and nobody else.”