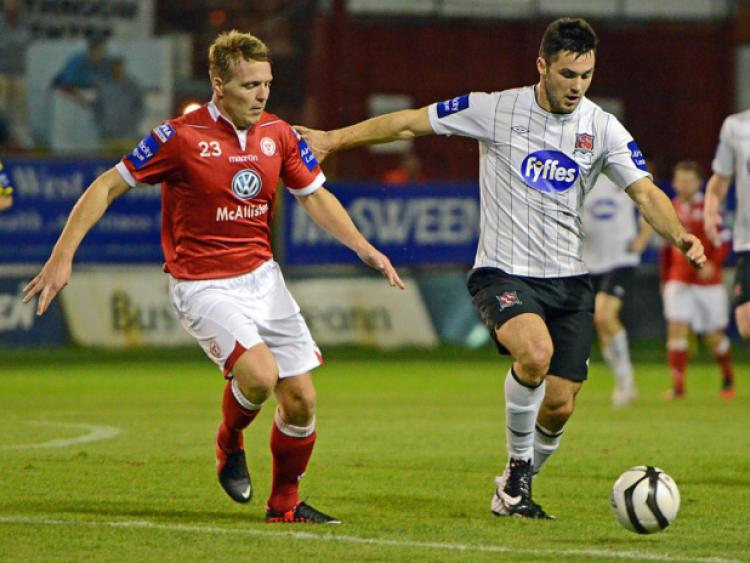 Dundalk Youths could not follow the first-team’s exploits at the weekend as they slumped to a 1-0 defeat against Shelbourne at Oriel Park on Sunday morning.

Dundalk Youths could not follow the first-team’s exploits at the weekend as they slumped to a 1-0 defeat against Shelbourne at Oriel Park on Sunday morning.

Alan Browne’s side started brightly and Sean Matthews saw a free-kick just go over the top in the 10th minute.

Matthews was involved again soon after and his low ball across the box was nearly turned into his own net by a Shels defender.

The young Lilywhites spurned a glorious opportunity to take a lead into the half-time break when Cody Magill saw a 40th minute penalty come back off the post after he had been taken down in the box.

Dundalk didn’t let this deter them however and two minutes later Matthews raced onto a great ball from Adam Boyle to send in a cross which Gary Crummy met with a header that was well saved.

The home side continued to ask the questions in the second-half and Boyle saw a shot tipped around the post before Matthews shot wide of the target.

Shelbourne looked like they would be happy with a point and a wayward effort in the 70th minute was notable in that it was a rare venture into the Dundalk final third.

The Youths kept plugging away but they were left frustrated as two Frank Osadebe efforts failed to make the breakthrough; one a cheeky chip which was well saved, the other blocked by a Shelbourne defender.

And Browne’s side were left stunned with 10 minutes to go when a ball from the right was sent into Fergal Sheeky’s penalty area and the ball was slammed home to give the Reds all three points.