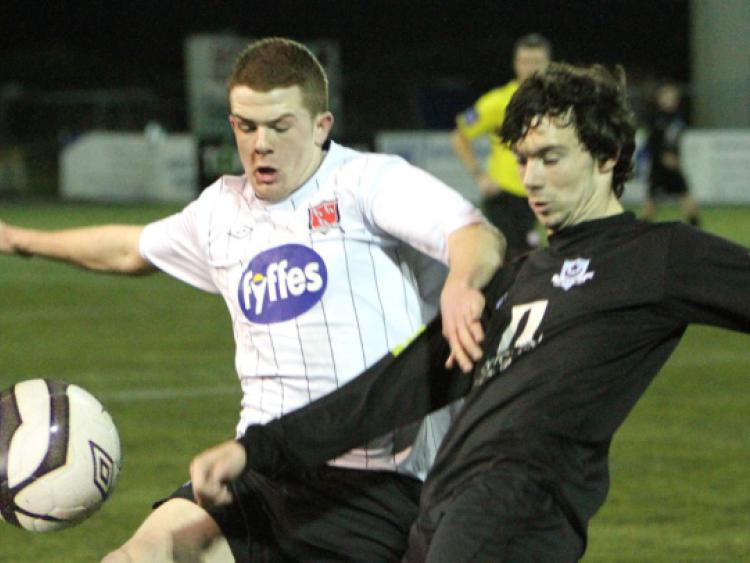 Dundalk battled back from going 2-0 behind before ultimately going down to a narrow loss against an Irish Schools select side last Tuesday.

Dundalk battled back from going 2-0 behind before ultimately going down to a narrow loss against an Irish Schools select side last Tuesday.

Both sides played with freedom and authority, free from the pressure of competitive football, and some nice passing led to a great opportunity for Ireland after Jamie McGrath got his body in front of Dundalk trialist Patrick McLean, brother of Irish international and Wigan winger James, inside the box and hit the ground which had the referee blowing for a penalty.

It was McGrath himself who stepped up to try and do the dutiful but he was denied when Dundalk goalkeeper Ryan Davis got down low to his left to keep it out ith a great stop.

Georgie Kelly’s free header from a Dylan Kavanagh inswinger flew over but it would be that same combination that made no mistake when they were given a second chance. A short corner moments later caught the Dundalk defence unaware as Kavanagh dribbled threateningly into the area and then sent an enticing cross-shot goalwards which Kelly nodded into the top corner.

Ireland doubled their lead when Ryan Swan played the perfect pass behind the defence and McGrath was on it in a flash and kept a cool head to clip over Davis and make amends.

Dundalk responded well and almost pulled one back when Ciaran O’Connor laid off for Conor McDonald but his effort was saved by Patrick Donegan.

A lovely flowing move from Dundalk 30 seconds after the restart saw McDonald return the favour and play in O’Connor and when he tried to nudge his way past a challenge, he was upended. The penalty was awarded which he slotted home to bring a revitalised Lilywhites back into the contest.

With just over 10 minutes remaining, Dundalk got the equaliser their second half performance deserved. Ireland were guilty of trying to play out from the back and Donegan’s slack kick out was pounced upon by O’Connor, whose strength had continually caused problems, and he blasted past Donegan at his near post.

Two minutes later, a quick and incisive Irish Schools counter brought them from one box to another and a clever cutback found substitute Aaron Ashe in space and he calmly swept the ball into the corner.