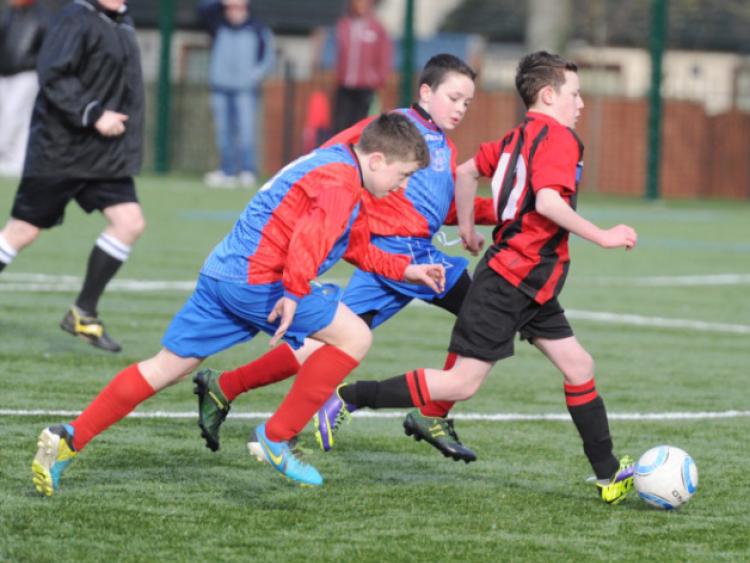 Bay United put in a clinical performance to overcome visitors Bellurgan 5-0 at the Dundalk Sports Centre in the only league fixture played on Saturday morning.

Bay United put in a clinical performance to overcome visitors Bellurgan 5-0 at the Dundalk Sports Centre in the only league fixture played on Saturday morning.

It was an impressive showing by the home side who were on their game right from the first whistle. William Opuko could have scored in the first minute but his shot went the wrong side of the Bellurgan post and then had a volley that was well saved by Bellurgan keeper Martin McEneaney.

It was all Bay at this stage as they took full advantage of the strong wind in their favour. A Ben Goss corner in the 15th minute found the head of the unmarked Tom Jackson but his effort bounced off the post.

The deadlock was broken a couple of minutes later when the hosts were awarded a penalty for a tackle on Joseph Osobe in the area which was comfortably dispatched by Michael Begley to put Bay 1-0 ahead.

It was soon 2-0 when Osobe whipped in a superb cross to Jackson who fired past the stranded McEneaney and added a third when Sean Hill poked home through a crowd of players in the Bellurgan penalty area.

Bellurgan battled bravely in the second-half but Bay were solid in defence and the game was ended as a contest eight minutes after the restart when a low shot from Ope Stephens found the corner to make it 4-0.

The visitors almost got a goal back afterwards but Jake McArdle was denied by a superb save from Bay ‘keeper David Odumosu. The home side went on the attack immediately from Odomusuo’s clearance and the ball ended in the back of the net at the other end with Tom Jackson scoring his second and Bay’s fifth goal.

Luke Higgins, Glen Stewart and Sean Finnegan all went close for Bellurgan in the closing stages but the home side kept a clean sheet and climb into third place in the league table.