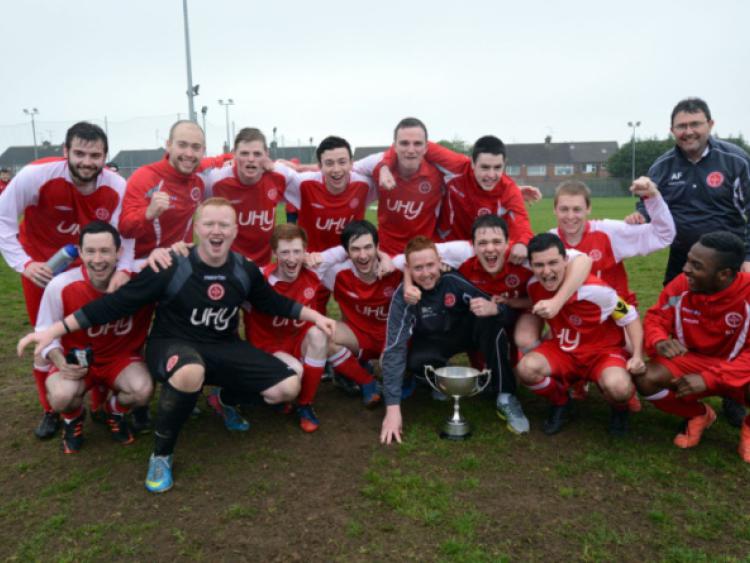 Cup finals can often tend to be dour, uneventful occasions but it is fair to say that last Saturday’s OCC Chartered Accountants MDL Reserve Cup final between Muirhevnamor 2nds and Rock Celtic 3rds was anything but.

Cup finals can often tend to be dour, uneventful occasions but it is fair to say that last Saturday’s OCC Chartered Accountants MDL Reserve Cup final between Muirhevnamor 2nds and Rock Celtic 3rds was anything but.

Eight goals, three red cards, a disallowed strike, three penalty kicks and a host of missed chances were just some of the ingredients of this dramatic encounter at Glenmuir Park.

When referee John Crawley blew his final whistle, Muirhevnamor had just eight players remaining on the pitch, their treble dreams ended by Alan Farrelly’s young Rock Celtic side who capped a memorable season by coming from the C Reserve Division to clinch the cup.

In a game packed full of incident, the drama began to unfold as early as the 3rd minute of play.

A long ball over the top caught the Muirhevnamor back four square, setting Rock Celtic centre-forward Brendan Rogers in on goal. His touch took the ball away from Muirhevnamor goalkeeper David Cooney and, when Rogers went tumbling, referee Crawley was quick to point to the spot and even quicker to reach for the red card.

The protests from the Muirhevnamor camp fell on deaf ears and left-back Conor Hackett made no mistake with the penalty, leaving substitute - and stand in goalkeeper - Robbie O’Hanlon with no chance.

Crawley’s assistant Robert Martin became the focus of attention for the first time three minutes later. Mor centre-back Paul Mallon fired a free-kick towards the Rock Celtic box from just inside his own half. The delivery was misjudged by Seasiders goalkeeper Jordan Mackin and ended up hitting the net but the celebrations were premature as Martin’s offside flag cancelled the goal ruled out. A highly controversial decision as no Muirhevnamor player seemed to be interfering with the flight of the ball.

The game finally settled down and 16-year-old Mackin made up for his previous error by making a fantastic save to deny Michael Bergin’s thunderous half-volley from restoring parity. From the resulting corner-kid, Kiyo McKay saw a header just clear the crossbar.

Rock looked capable of unlocking the Muirhevnamor defence on the break and so it proved after 31 minutes as the Sandy Lane side struck a crucial second goal.

Again it wasn’t without controversy. A great pass from Rock skipper Ronan Farrelly set Rogers haring away on the left. Crawley ignored appeals for a handball against the Seasiders no 9 and after his attempted cross was blocked by Sean Dixon, Rogers let rip with a low drive that beat O’Hanlon.

That left Seamus O’Hagan’s ten men with a mountain to climb and it almost became insurmountable minutes later. Farrelly’s incisive pass carved open the Muirhevnamor back four again. Darren Tuite’s cross looked set to be gobbled up by Rogers but Mallon was on hand to get the ball away for a corner.

Half-time approached with Muirhevnamor trying hard to force their way back into the game and they almost succeeded a minute before the break. Gary Clarke’s dinked cross picked out the head of Damien Bailey but Mackin made another great stop, flinging himself to his left to keep his goal intact.

The second-half was in its infancy when the Seasiders hit the third goal. Farrelly was again the creator, his cross field pass searching out Tuite at the far post. The winger slightly scuffed his finish but it had enough purchase to trickle past O’Hanlon and leave Rock Celtic with one hand on the trophy.

Any notions that the game would peter out were blown away as the final descended into chaos on the hour mark.

Mallon, who was earlier booked, was shown a straight red for making inappropriate comments to the officials and, before the game has restarted, Muirhevnamor were down to eight with Padraig Smith also given his marching orders by Crawley, under instructions from his assistant Martin.

Despite having just seven outfield players to try and work an opening, Muirhevnamor rallied and made it 3-1 in the 52nd minute when Sean Dixon beat Mackin from the penalty spot at the second time of asking.

This time it was the Rock camp who felt aggrieved as the goalkeeper had made a fantastic save to deny Dixon’s first effort. Crawley ordered a retake after his other assistant, Brendan Gillespie, had flagged to highlight the fact that there were members of Muirhevnamor’s coaching staff on the pitch.

The cat was firmly set amongst the pigeons in the 67th minute when the B Reserve champions reduced the deficit to just one goal. A good move involving Clarke and captain Conal Mulvenna ended with the tireless Bergin stealing in to make it 3-2.

Rock missed a host of missed chances to kill the game off but their blushes were spared when Des Donohue finally restored their two goal advantage by sweeping home substitute Josh Arrowsmith’s cross.

McKay hit the woodwork again from a Clarke free-kick as the eight men tried to hang on for dear life but their resistance was broken once and for all as Rock finally put their numerical advantage to use.

Arrowsmith rounded O’Hanlon to make it 5-2 before Farrelly put the icing on the cake - and the cap on an action packed day - with a blistering dive in the final minute.