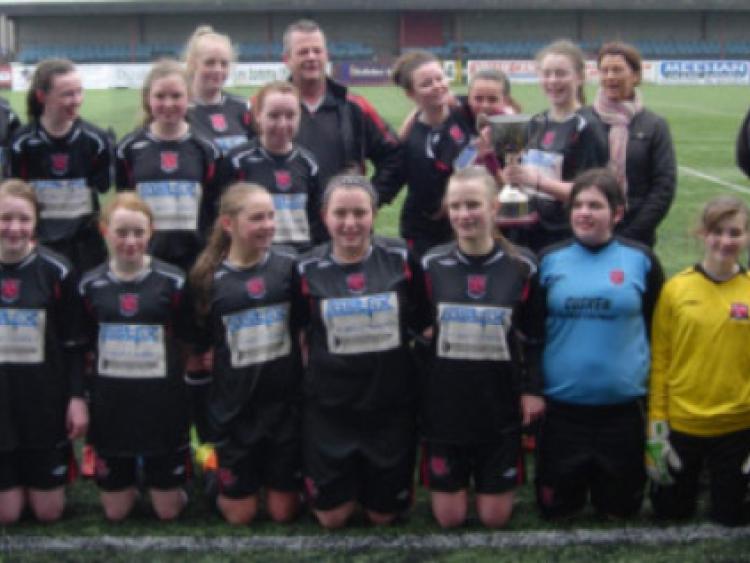 The visitors with a strong wind behind them started strongly and had Dundalk pinned in their own half for much of the first 15 minutes. Dundalk defenders Vanessa McQuillen, Shauni Carraher, Hannah Morris and Ciara Matthews had their hands full trying to contain a good Enniskerry team.

Goal keeper Ellen Campbell had to be quick off her line on a number of occasions to deal with long balls over the defence. Chloe Connolly played well in midfield and helped to relieve the pressure on her back four with some good runs through the middle.

Dundalk had the wind in the second half and they got off to the ideal start when a quick throw in on the left hand side by Hannah McGivern put Reanne McCourt into space.

She muscled her way past two defenders and although her initial shot was saved by the Enniskerry keeper, she calmly stroked the rebound into the empty net to leave it 2-0 to Dundalk with barely a minute played in the second half.

However, this Enniskerry team were proving difficult to put away and after some clever play down Dundalk’s left side they managed to pull one back after seven minutes and the score was now 2-1.

Enniskerry sensed that they could still get something out of the game and pushed forward in numbers. In the 12th minute Ellen Campbell pulled off an amazing save from from point blank range but was helpless as the rebound was tucked away. The referee immediately blew for offside, with sighs of relief all round.

Dundalk managed to wrestle back control of the game and in the 20th minute Sarah McAleer managed to score a third goal after some good work down the right hand side by Reanne McCourt.

This was a tough and disciplined display by a Dundalk team that has won 12 of their 14 matches this season; losing only the corresponding away fixture to Enniskerry.

Leading the league from early on has not been easy for this young side - the majority of whom will still be eligible next season - as the pressure increased week by week.

Given that this is the club’s first time fielding a team at this age level, manager Dave Carraher and physio Vivienne Watters are understandably proud of the effort by all concerned.