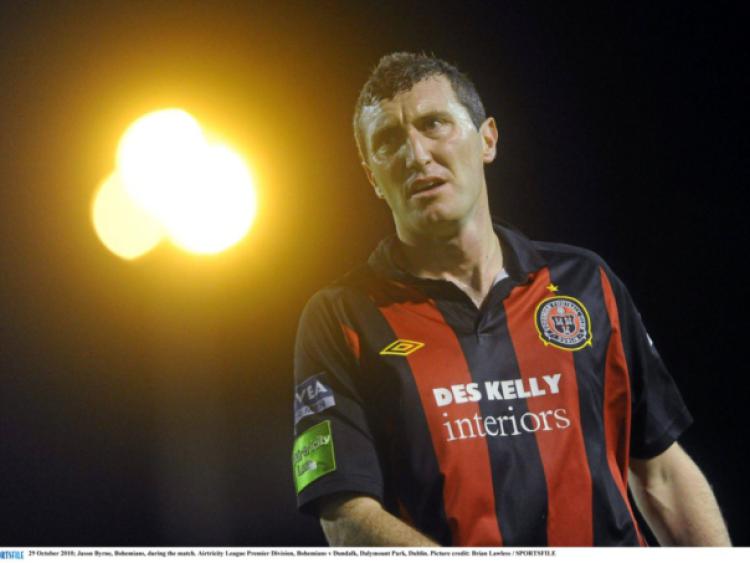 He may only have spent one season of a long and distinguished career with Dundalk but Irish football legend Jason Byrne looks back on his time at Oriel Park with fond memories.

He may only have spent one season of a long and distinguished career with Dundalk but Irish football legend Jason Byrne looks back on his time at Oriel Park with fond memories.

Quigley and Byrne arrived from Bohemians and, looking back, Jayo feels it was their season at Oriel Park that got the enigmatic Quigley’s career back on track.

“I think the year we spent at Oriel Park was the revitalisation of Mark Quigley. That was a great partnership we had,” said the man with the second highest goals tally in League of Ireland history.

“Mark sort of went missing for a few years but the year he had up there with myself, when he was playing the number 10 role, he was unbelievable. He got 20 odd goals that year and was fantastic. It showed what a great player he was.”

Byrne made a bright start to his Dundalk career but injuries, most notably the one which saw him limp out of the Setanta Cup final loss to Shamrock Rovers in Tallaght, restricted him to just 28 appearances in all competitions.

Despite that, he still finished as the Lilywhites’ top scorer in the league but a season that promised much faded badly and Dundalk finished in seventh place.

“I think I got eight or nine goals that year which wouldn’t be the best return for me. I think I would have got a lot more if I didn’t have the injuries because we had a great team with some top individuals. It was a pity that we didn’t manage to stick together to be honest because we could have done a lot more.

“It will be good to get back up there”, he added. “We got to the Setanta Cup final and they looked after me when I was there. It’s always nice to go back and see some happy faces and say hello.”

After leaving Oriel Park, Byrne returned to his first club, Bray Wanderers. He spent two seasons back at The Carlisle Grounds - scoring two penalties in their 2-0 win over Sean McCaffrey’s Dundalk in May 2012 - before going back to Dalymount Park where he hopes to bring the Gypsies back to the heights he was accustomed to during his first spell there.

Byrne is already off the mark for Bohs this year, scoring a goal on his second debut away to UCD on the opening night of the season. He is now just 28 goals away from breaking Brendan Bradley’s all-time League of Ireland scoring record but he insists that scoring for the Phibsboro men is his first and foremost priority.

“I don’t think about the record too much, I just want to score goals for Owen Heary. He told me when I signed that goals were the thing that the club was lacking last year. To be honest it is him that keeps going on about me breaking the record more than myself!”

Bohs arrive at Oriel Park off the back of a 3-1 loss to Shamrock Rovers. A Dublin derby reverse to Rovers is never a nice feeling but Byrne felt there were plenty of positives for his team to take from the defeat.

“In patches we did really well but gave some sloppy goals away. There is a lot for us to build on and we will be looking to do that this week I don’t think it was a 3-1 game”, he said.