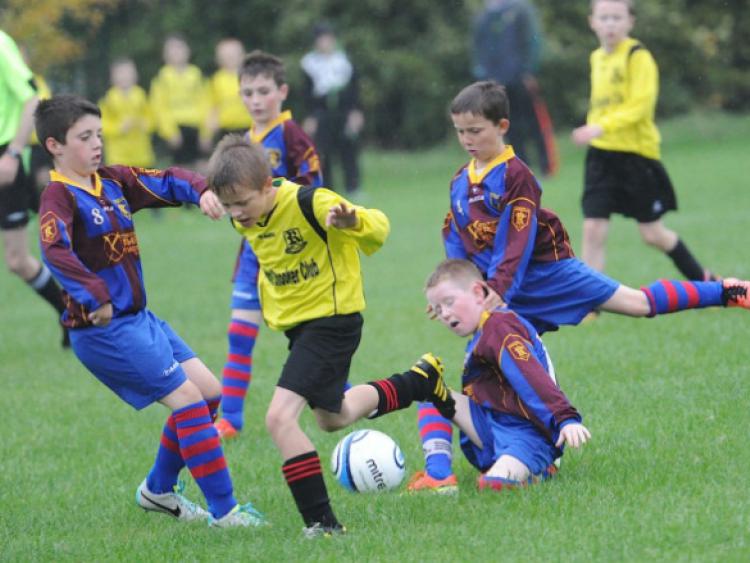 Danny McKeauge slotted home the equaliser in the final minute in this U15 game at the DKIT grounds to grab a well-earned point for Woodview on Saturday afternoon.

Danny McKeauge slotted home the equaliser in the final minute in this U15 game at the DKIT grounds to grab a well-earned point for Woodview on Saturday afternoon.

The game was, as the score-line suggests, a tight affair, and Woodview should have been in front as early as the secondnd minute when Ciaran Fullerton’s effort skimmed past the Glenmuir post.

It was the away side who opened the scoring in the seventh minute when a Timmy Olowookere free kick found the unmarked Ronan Murphy and he made no mistake from eight yards out to put his team in front.

Bernard Laverty added a second for Glenmuir from the penalty spot in the 24th minute to make it 0-2 after Oran Murphy was upended in the box. In between Woodview did create chances but were not clinical enough in front of goal.

Tiernan Mulligan headed over from close range, Shane Duffy fired inches wide and Shea Ardey’s free kick was tipped around the post by Glenmuir ‘keeper Conor Byrne. It was more of the same in the second half as Woodview showed great determination to get back into the game and they created two good chances in the first few minutes after the break but Byrne produced two goods saves to deny Duffy.

Glenmuir nearly extended their lead when Nicholas Browne won the ball on the left flank, cut inside and fired over the Woodview crossbar. Duffy pulled a goal back for Woodview in the 12th minute of the second half when his free kick flew into the top corner.

Oran Murphy then had a glorious opportunity to score for Glenmuir after great play from Olowookere but his hurried effort was wide of the target. Niall McGuinness, a second half substitute for Woodview, was causing a lot of problems for the Glenmuir defence with his technique and pace as the home side continued to drive forward in search of a an equaliser.

They got their reward in the final minute when McGuinness won possession just outside the Glenmuir box and he rolled the ball into the path of McKeauge who fired home to make it 2-2.