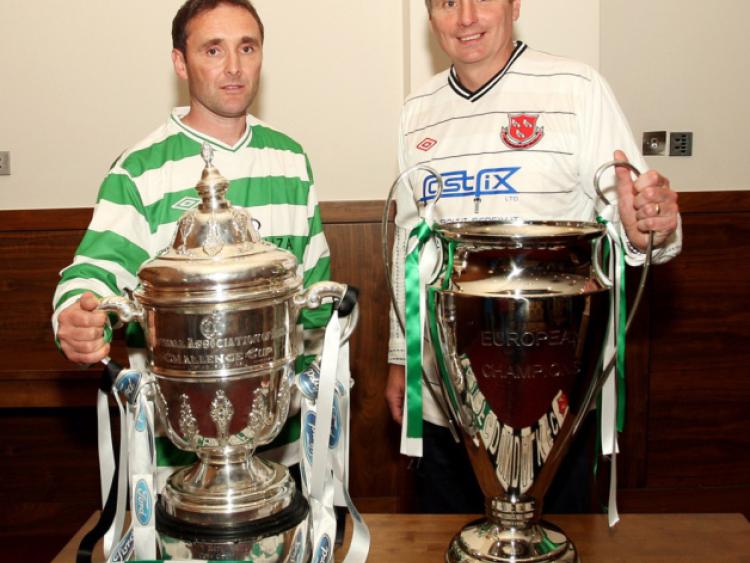 The 2002 Dundalk FC FAI Cup wining squad will reassemble for the first time since that famous sun drenched day at Tolka Park 11 years ago when they take on Celtic Legends at Oriel Park this Saturday.

The 2002 Dundalk FC FAI Cup wining squad will reassemble for the first time since that famous sun drenched day at Tolka Park 11 years ago when they take on Celtic Legends at Oriel Park this Saturday.

Right-back on the day, John Whyte, will also manage the team and speaking at the press conference to launch the game in the Crowne Plaza last Wednesday, he said he was looking forward to meeting up with some old friends.

“I’m really looking forward to it. Playing against the Celtic Legends will be fantastic for me personally and for the rest of the lads.

“Des Denning, the Chairman in 2002 is here today, and it will be good to see everybody get back together.

“After the cup final, during the celebrations, we were all saying we would meet up again in 12 months or so but unfortunately things never seem to work out that way.”

Sitting alongside Whyte was present Dundalk manager Stephen Kenny - who just happened to be in charge of the Bohemians side who were put to the sword by Gary Haylock’s double on that April day in north Dublin.

“The last time I was on a pitch with this man (Kenny) I was commiserating with him”, said Whyte.

“He’s doing a fantastic job with Dundalk now”, he added. “If you look at where we are in the league, we’re still in the cup and attendances have gone up.

“The interest has also gone also back for a lot of people. People, who over the past few years said they were finished going up to oriel Park, are all of a sudden back.

Whyte’s counterpart, former Hoops left-back and manager of the Celtic Legends Tommy Boyd was also in attendance and he too is also relishing the chance to dust down his boots.

“I thought it was the 1992 cup winning team but I’ve been told today it’s the 2002 cup wining team we are playing”, he quipped.

“Players love to play. Even though we are retired, we all still love to get the boots on and get a feel of the ball.

Tickets for the game are priced at €10 and are available at Oriel Park and other outlets throughout the country. The match is only the beginning of the day as there is also a very special banquet in the Crowne Plaza in Dundalk on the night of the match and there is a special offer for the day with a match ticket, a ticket for the banquet and a night’s bed and breakfast for the outstanding price of €100.Tickets are priced individually for the banquet at €50 euro.

There is also a wonderful opportunity to play for either the Dundalk Legends team or the Celtic Legends team for the price of €250! There are five places available in each squad.