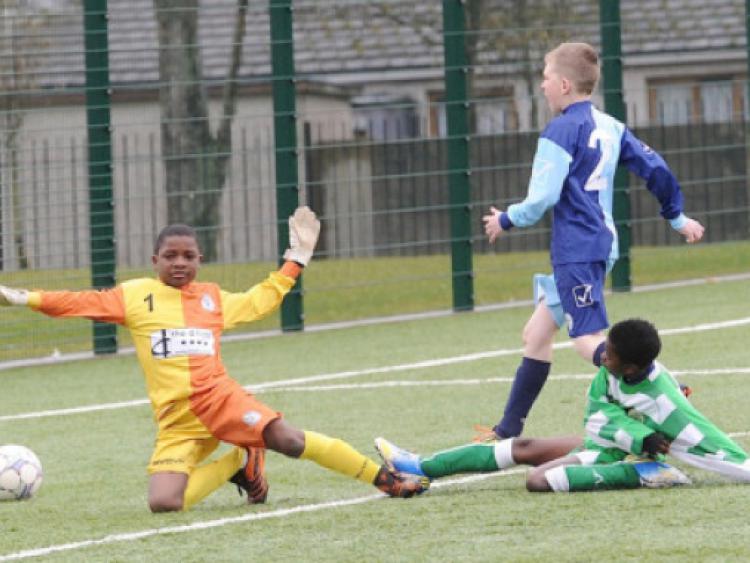 Bay United ground out a 2-1 win over Rock Celtic in the U12 Premier Division on Thursday night in Bellew Park.

Bay United ground out a 2-1 win over Rock Celtic in the U12 Premier Division on Thursday night in Bellew Park.

A strong wind and torrential rain throughout the entire game made it very difficult for the players but credit must be given to both sides on trying to keep the ball on the ground despite the conditions.

It was one of those games where Rock Celtic could have taken the points home with them based on the amount of chances they created but a superb goalkeeping display from David Odumosu helped Bay United earn all three points for the home side.

The Bay United ‘keeper was the stand-out performer with a terrific display in goal earning him man of the match status. He produced two outstanding saves with his feet in the first six minutes; blocking Edward Desanya’s rasping shot in the 4th minute and did the same again two minutes later to deny Oran O’Hanlon.

Bay United were struggling to settle against the strong wind but they took the lead on 13 minutes when Ope Stephens took control of the ball outside the Rock penalty area and fired home through a wall of Rock Celtic defenders.

The home side gained confidence from the goal and Joseph Osobe and Paddy O’Callaghan had chances to increase their lead but the sides were soon level when Josh Connolly laid the ball into the path of Conor Soraghan who fired in a superb shot to the roof of the Bay net for a brilliant equaliser.

Kevin Campbell then had a good chance to put Rock ahead just before half time but his goal bound effort was deflected off a Bay defender for a corner kick.

The away side had another glorious opportunity early in the second half when Edward Otesanya was played in behind the Bay defence but he dragged his shot just inches wide of the post. Then Kevin Campbell was denied at close range by another save from Bay ‘keeper David Odumosu.

Rock Celtic had lots of possession but they could not find a way past Odumosu but the killer blow for the away side came 17 minutes into the second half following a corner when Bay United right full Sean Hill, from a long way out, stepped up to fire an unstoppable wind assisted shot past Rock Celtic ‘keeper Taio Ogunnaike.

Rock piled on the pressure in search of an equaliser. Josh Connolly shrugged off the challenge of three Bay defenders but his shot was saved once again by Odumosu and in the final minute the Bay net minder produced another terrific save from a well struck effort by Conor Soraghan.