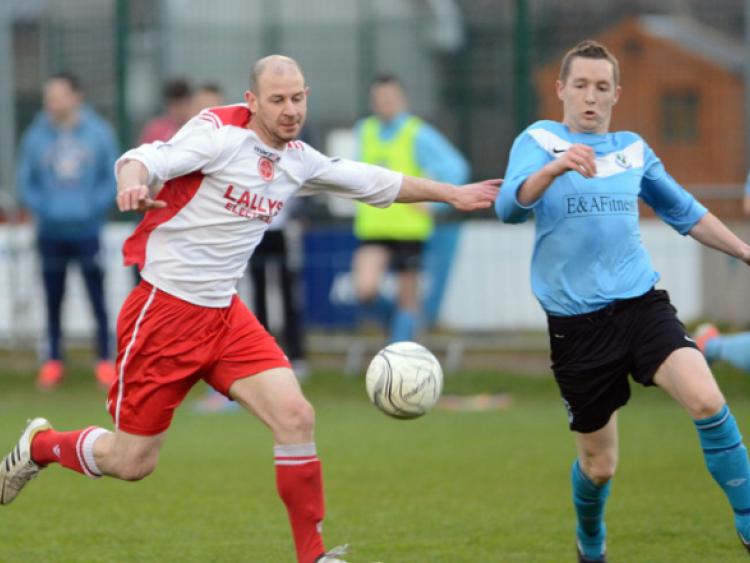 Alec Bothwell’s side took control of the game from the outset and they opened the scoring after 15 minutes when Ciaran Rogan beat a couple of defenders before threading the ball through to Sheelan who blasted the ball to the roof of the net.

Bellurgan continued to call the shots and it was no surprise when they doubled their advantage 25 minutes later. It came from a well worked move involving Owen Traynor and Jason Brennan.

The latter’s deep delivery was met by the head of Darryn Gaynor who saw his effort palmed away by Johnstown goalkeeper Ron Croke but the predatory Sheelan was lurking with intent to tap home and claim his second goal of the game.

Johnstown tried to get back into the game and with just minutes of the first-half remaining Robert Arthur made a brilliant stop when Johnstown striker Jonathon Forde broke through the United backline one.

The second-half saw Bellurgan play keep ball and they carved open their opponents defence at will with Gaynor, Sheelan and Daniel O’Connor all having efforts cleared off the line.

Midway through the half Johnstown were reduced to ten men when Daniele Gismondi saw red for a second bookable offence after a rash challenge on Ciaran Casey.

Bellurgan took their foot of the gas but a Shane Conroy effort apart - which drew a stunning save from Arthur - Johnstown never really looked like getting back into the game.

Bellurgan will now face Division One champions Newfoundwell in the final which has been provisionally fixed for United Park, Drogheda on Saturday, May 17.