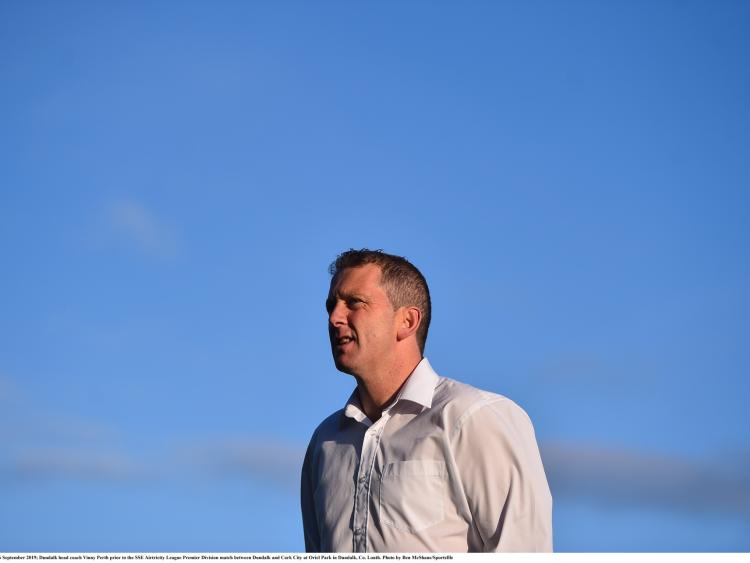 Vinny Perth has called the rescheduling of their SSE Airtricity League Premier Division clash with Shamrock Rovers “ridiculous”, with Dundalk FC’s head coach saying there was plenty of space to fit the back fixture into October.

The game between the league’s top two was originally due to take place at Oriel Park next Friday but had to be postponed after Dundalk made it through to the EA SPORTS Cup final.

It has now been re-fixed for Monday September 23, and should the defending champions win their next league outing in Waterford three days prior to that, on September 20, they would secure a fifth title in six years with victory over the Hoops.

Dundalk are on course to play 17 times in a 61-day period, between 24 July and the visit of Rovers, yet in the whole month of October, they play just four times.

The decision to squeeze the game into an already squashed September schedule has, understandably, irked their boss.

“How close are we, I don’t know,” Perth said, asked how close they are to being called ‘champions-elect’ after going 10 points clear at the top of the table. “We just keep going and going. We don’t have to play another league game for two weeks now. It’s a big cup week.

“I’m stuck for words on it. It was dropped in. And then by the way, we play them at 7.20pm because RTÉ want to show it. It’s just ridiculous stuff.

“We have four league games in October. There was enough time to play that game. But there you go. We have to get on with it.

“Despite what people will say, we’ve only had one game we called off this year and that’s the Sligo one. All the other games were for different reasons. UCD was the U21 International call-ups and Cork City because they were playing in Europe on a Thursday and we were maybe playing on a Tuesday, so we couldn’t play it.

Perth added: “It’s physically demanding of players. We’ve been brilliant. We’ve gone on this run where it’s been goals, goals, goals, and the style in which we play – but you can’t keep going to the well like that.

“As I said, I’ll probably be criticised for it, but I have to look after the players, and I’m not sure we’re looking after them to the best at the moment.”