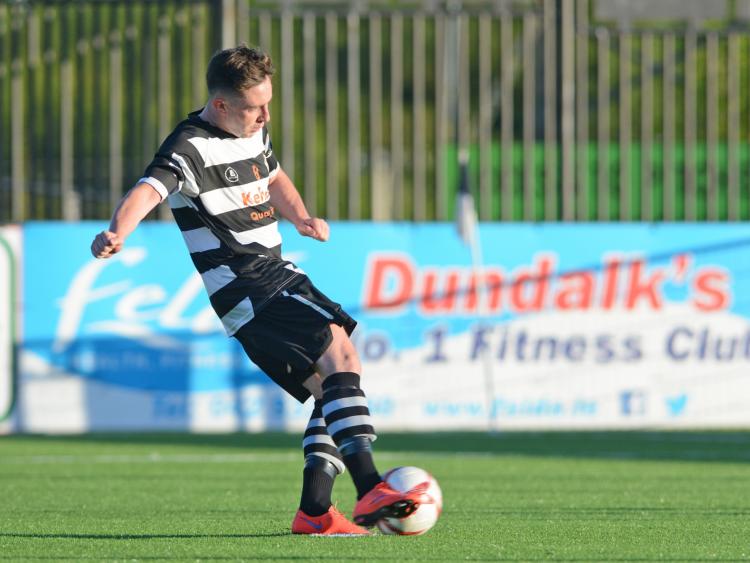 Goalscorer Colin Finan completed a personal double at the weekend having helped the Sean O’Mahony’s to victory the night before scoring the winner for Quay Celtic in the Kilmessan Shield Final.

Finan, a self-proclaimed veteran of the Point Road set-up, calmly slotted a second-half penalty to the net to give Quay the win and cap off their first season back in the top-flight with silverware.

“There were no nerves with the penalty at all, I’m never nervous,” Finan quipped when speaking to the Dundalk Democrat after Saturday night’s match.

“It was a good win today because we worked very hard and we just got the rub of the green to get the penalty.

“We were under pressure at the start of the second-half but the lads showed a lot of character to weather that a little bit and we improved as the half went on.

“We’ll have a few drinks now and enjoy ourselves tonight because we deserved this, he said.

In a scrappy game of few chances, Finan reckoned it was always going to take a bit of luck to swing the game either way.

“It was difficult, it’s always a difficult game when you come up against your local rivals,” the Quaysider said.

“It’s always nip and tuck and it’s just about who gets the rub of the green on the day, that’s all that’s in these type of games.

“You have to win each tackle and it’s always going to be gritty. It wasn’t the prettiest game I don’t think, but this is a brilliant feeling.”

The season itself saw the Clancy Park men survive in the NEFL Premier Division, however, while Muirhevnamor, one of the teams Quay came up with last year, won the title, it turned out to be a season of struggled for Finan and his teammates.

“We felt we had the team and the squad to push on for the title even this year and it was disappointing because some of the results just didn’t go our way throughout the campaign,” he added.

“Our form wasn’t great coming into the final because we got beat 7-0 (against Duleek) and 3-0 (to Navan Cosmos) and we had been conceding goals left, right and centre.

“So, from that point-of-view, it’s great to keep a clean sheet today. The boys at the back, Stefan (McKevitt) and Dennis (Cholach) with a man of the match performance.

“I almost can’t thank them enough for such great performances.

“The squad is both young and old. There’s Johnny Winters who’s been around the club for 20 odd years and that’s his first trophy with Quay.

“It’s always a good season when you win a trophy at the end of it so we can’t complain too much. It’s brilliant for the club to get a first senior trophy in a very long time,” a jubilant Finan admitted.