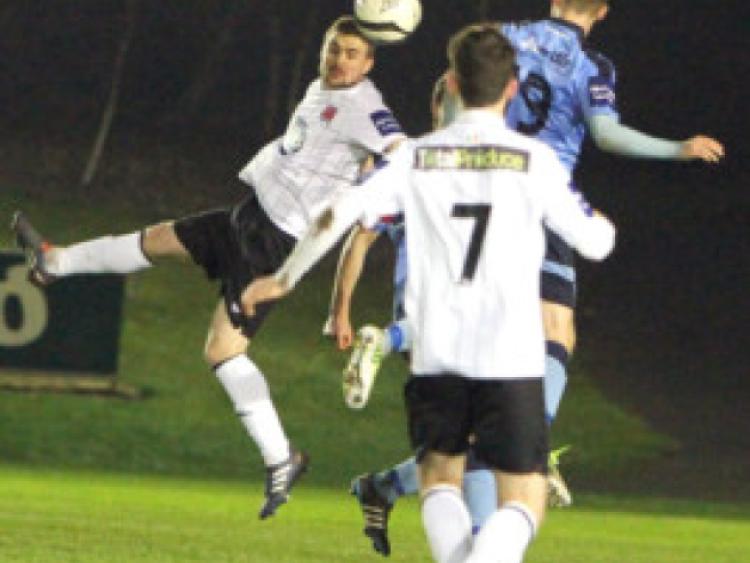 Local striker Tiarnán Mulvenna was the ‘Super Sub’ for Dundalk at the UCD Bowl on Saturday night but he is eager to quickly lose that tag as he targets a regular place in Stephen Kenny’s team.

Local striker Tiarnán Mulvenna was the ‘Super Sub’ for Dundalk at the UCD Bowl on Saturday night but he is eager to quickly lose that tag as he targets a regular place in Stephen Kenny’s team.

Mulvenna’s pre-season programme had been disrupted by a hamstring injury sustained in the opening friendly against Finn Harps, and his only involvement prior to the weekend was when starting against Shelbourne in the League Cup a fortnight ago.

However, he gave Kenny plenty of food for thought after proving the match-winner against the Students, as he scored within a minute of entering from the bench before playing a role in the second goal for John Dillon shortly after.

It was a first league outing for Dundalk for Mulvenna since July 2010 and a first goal since the winner against Drogheda United the same month.

And, having “shown what he can do”, Tiarnán is hoping that he can now claim a starting place as he battles with Kurtis Byrne, Patrick Hoban and Vinny Faherty in the frontline.

“I want to play. It’s massive to play and that’s the reason I came back,” Mulvenna said. “It’s just unfortunate that I got that injury and maybe it would have been different. But I’ll take it as it comes and hopefully next week I’ll get another run and see how it goes.

“We have four good strikers. You could see it in pre-season with Pat scoring, everyone knows what Vinny can do in the league, and Kurtis scores for fun, for God’s sake.

“I have to prove myself as well, but you would rather have competition than have nothing. You can only improve yourself.

“It was good to get a run. I had a tough pre-season with the hamstring injury, but I’ve bided my time and come in and shown what I can do.

“The goal inside a couple of minutes of coming on and then laying John’s goal on with a header – it was good just to be involved, and it’s a massive three points for us.

“I cut inside the defender (for the first) and saw the ‘keeper coming towards me so I just lifted it over him – it was just one of those ‘spur of the moment’ things, and it worked, thank God.

“(For the second) John was screaming behind me so I knew he was there; it was just a deft touch to him and it was a great finish with his left foot.”

Dundalk now go into Thursday’s Louth Derby against Drogheda brimming with confidence, and it is an extra special game for Mulvenna, who won a League Cup and finished as league runners-up with the Boynesiders last term.

“It’s a massive game probably for myself and the town,” he said. “But it’s just another three points on offer for us.

“We have to keep going. We’ve had a good start with probably the two toughest teams already. To come out with seven points out of 12 is massive for us, and it’s onwards and upwards.

“The crowd have come back, which is always nice. Dundalk is a massive footballing town and we have to repay them.

“We have gone out and worked hard, even in pre-season – we went to Wexford for a couple of days – and we’ve gelled as a team, and I think the results are paying off.”