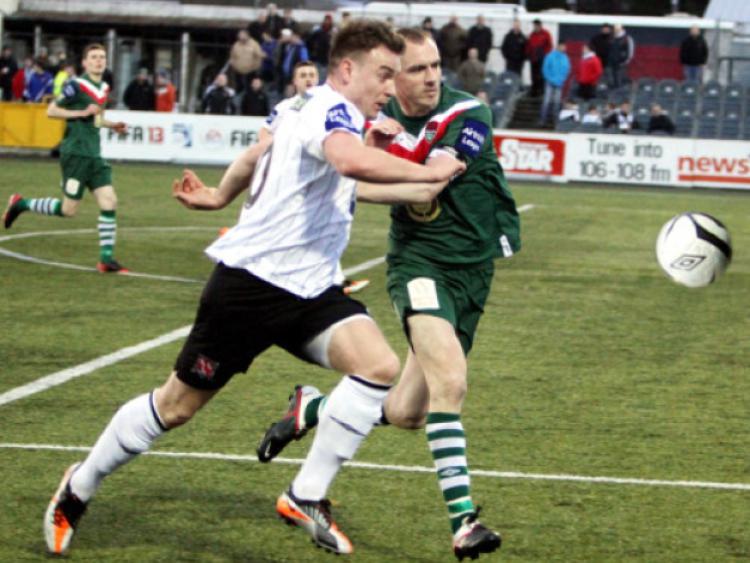 TWO former Mervue United men helped Dundalk to their first home win of the season as the Lilywhites powered to an impressive three points against Cork City in front of the RTE cameras at Oriel Park on Friday night.

TWO former Mervue United men helped Dundalk to their first home win of the season as the Lilywhites powered to an impressive three points against Cork City in front of the RTE cameras at Oriel Park on Friday night.

John Mountney allowed a John Sullivan throw in to run across his body before flashing a wonderful left footed effort into Mark McNulty’s top right hand corner to give the home side the lead in the 76th minute.

And substitute Patrick Hoban made sure of the result when he headed home in the final minute after Keith Ward’s free-kick had come back off the bar to give Stephen Kenny his maiden win at the Carrick Road venue at the sixth time of asking.

Nobody in attendance could question the outcome. Dundalk were in command right from the get go and the Lilywhites should have had the points safely in the bag before the former Mervue duo struck.

Kenny’s side are going from strength to strength and some of their vibrant play, especially in the second-half, was a joy to watch.

It is quite a turnaround for the club; this time 12 months ago, under Sean McCaffrey, the cracks that almost tore the football club apart were beginning to show - on and off the field. Now, there is a massive feel good factor attached with supporting Dundalk FC and on the evidence of Friday night, that will only multiply as this team beds in over the next few months.

The Leesiders arrived at Oriel Park in the midst of a defensive crisis. City boss Tommy Dunne had to manage without four of his regular centre-backs and Colin Healy, who was a major doubt before the game, was called in at the 11th hour to plug a hole at the heart of his back four.

Kenny once again opted to partner Tiarnan Mulvenna and Vinny FFaherty in attack and the duo almost combined inside the 1st minute. Faherty rose well to flick a high ball into his fellow striker but, with the Cork back four stretched, Mulvenna’s return ball just had too much pace.

Richie Towell has been one of Dundalk’s most impressive performers this season and he showed an example of his talents in the 8th minute. A lovely piece of approach play saw the former Celtic man try an audacious flicked cross from just inside the City box. The ball was only half cleared, falling invitingly for Towell again but his curling effort posed no danger to Cork goalkeeper Mark McNulty.

Cork City, whose team bus pulled into Oriel Park just 40 minutes before kick-off, looked like a team feeling the effects of a long bus journey and they posed absolutely no threat to Dundalk goalkeeper Peter Cherrie in the first-half.

Dundalk tried to ramp up the pressure and they had two great chances to open the scoring as the game ticked past the half hour.

Vinny Faherty was involved in both, pulling off Neale Horgan in the 30th minute only to head over from close range after John Sullivan had managed to dig out a fantastic cross from the right.

Mountney was the provider for the striker’s next opportunity four minutes later, the midfielder attacking Danny Murphy before cutting the ball back perfectly for Faherty who could only shoot over from 12-yards.

The home side did have the ball in the net after 37 minutes. Sullivan’s attempted pass deflected kindly into the path of Towell, who proceeded to dink it over McNulty. However the goal was ruled out for offside despite TV replays suggesting that Towell was in line with City full-back Murphy when the initial ball was played.

Dundalk remained on the front foot at the start of the second-half. Towell had a well placed shot blocked almost on the line before Stephen O’Donnell saw his looping header from the loose ball just clear the bar.

City showed few signs of waking from their slumber but they almost stunned the Oriel Park crowd in the 53rd minute. Ian Turner’s cross fell kindly for Daryl Kavanagh but he swept his effort wide of the far post.

Kenny’s side, driven on by the immense Towell, responded with a bout of fast tempo football and Mulvenna, with McNulty’s goals in his sights, strayed just offside from a Mountney pass.

The local striker was on target for Dundalk in their last victory over the Rebels at the Louth venue in 2009 and he should have broken the deadlock in the 70th minute.

Sullivan’s clearance fell kindly for the 24-year-old who held off Colin Healy only to scuff his effort agonisingly wide of the upright.

Many took that to be a sign that Dundalk’s winless run at Oriel Park would stretch to six games but Mountney banished those thoughts with his wicked volley six minutes later before Hoban sent the home support into raptures with his late header.